Renzi, Merkel and Hollande talk ahead of EU summit in Bratislava in September 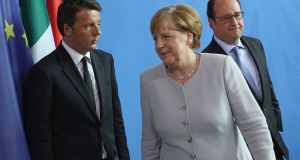 The leaders of the euro zone’s three largest countries will meet on a small southern Italian island today for talks on the European Union following Britain’s vote to leave.

Italian prime minister Matteo Renzi will welcome German chancellor Angela Merkel and French president François Hollande to Ventotene off the coast of Naples for a second round of trilateral talks before an informal EU summit in September.

The meeting aims “to show the unity of Europe’s three biggest countries, but not to create a specific club”, French diplomatic sources said, adding that the main goal was to prepare the informal Bratislava summit to map out a post-Brexit course for the bloc.

Mr Renzi chose the island because of its part in the foundation of the EU, the Italian government said. When imprisoned there during the second World War, Italian intellectuals Ernesto Rossi and Altiero Spinelli wrote the influential “Ventotene manifesto” calling for a federation of European states.

EU states are divided on what direction the bloc should take to counter mounting Euroscepticism. Brussels and other capitals fear calls for similar referendums could multiply.

Berlin said it wants “better Europe” rather than “more Europe”, with finance minister Wolfgang Schäuble urging states to be pragmatic and take an intergovernmental approach to solving the bloc’s problems. “The goal must first of all be to preserve the status quo and to prevent a further disintegration of the EU-27,” one EU diplomat said.

The last time the three leaders met as a trio the German chancellor signalled her lack of enthusiasm for “quantum leaps” towards further EU integration, warning that “any measure that strengthens the centrifugal forces already plaguing Europe could have unpredictable consequences”.

For Dr Merkel, the meeting is the start of a week of whirlwind diplomacy. She will meet heads of state in Tallin, Prague and Warsaw before hosting the leaders of the Netherlands, Finland, Sweden and Denmark, and then the presidents of Slovenia, Bulgaria and Croatia.