‘L’affaire Grégory’ mystery may have reached its dénouement 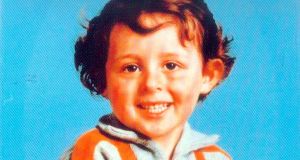 Gregory Villemin, who was found dead in the Vologne river in October 1984, with his feet and hands bound. Photograph: handout via Reuters

A 32-year-old saga of family feuding, secrets, jealousy and infanticide in the poor working-class villages of northeast France may be approaching resolution, the Dijon prosecutor Jean-Jacques Bosc announced on Thursday.

Four-year-old Grégory Villemin was found in the icy waters of the Vologne river at 9.15pm on October 16th, 1984. The child wore a blue anorak. His knitted cap was pulled down over his face, and his hands and feet were bound with rope. There was a rope around his neck, Mr Bosc told a press conference.

At Grégory’s funeral two days later, newspapers speculated that the murderer was among the mourners.

Investigators believe they have identified two of the corbeaux (“crows”) who wrote anonymous, threatening letters to members of the Villemin family.

Until now, suspicion always focused on individuals. “Investigations corroborated by criminal analysis show that several people colluded in the realisation of the murder,” Bosc said.

Three people arrested on Wednesday, and several others questioned this week, are elderly relatives of the dead child.

In 1984 journalists flocked to the Vosges to cover l’affaire Grégory, which became a permanent stain on the justice system and the media who relayed sordid rumours about the child’s mother, Christine, a factory worker.

L’affaire Grégory fascinated the country. It became the subject of some 3,000 newspaper articles, 50 university research projects, a television film and about 15 books, according to Le Parisien newspaper.

Investigators believe the crime was motivated by jealousy over the professional success of Grégory’s parents. His father, Jean-Marie, was a supervisor in a car-parts factory. Jean-Marie and Christine had bought a handsome villa. They owned two cars and a leather sofa.

On the night of the murder, an anonymous caller told Michel Villemin, the child’s uncle, “I got revenge. I got the boss’s son and I put him in the river.” Michel Villemin said the voice was “loud and nervous”, but he couldn’t say if it was male or female.

Bosc said that hundreds of phone calls were made by corbeaux, “from a woman and also a man with a breathless, rough voice”.

In 1983 three anonymous letters, two typed and one handwritten, were sent to Grégory’s grandparents, Albert and Monique Villemin, and his father, Jean-Marie, Bosc said.

Progress in handwriting analysis enabled investigators to identify the author of the handwritten letter as Jacqueline Jacob, who is married to Monique Villemin’s brother Marcel. The Jacobs, now aged 72, were both arrested on Wednesday.

“I hope you will die of grief, the boss, it’s not your money that will bring back your son. This is my vengeance, asshole,” said a typed letter posted to Grégory’s parents on the day he was killed.

Bosc noted similar language, in particular the use of the word “boss” in the letter written by the child’s great aunt and the “claim” letter acknowledging his murder.

Bosc said that in the late 1980s, Monique Villemin, Grégory’s grandmother, wrote threatening letters to the judge who would eventually clear her daughter-in-law, Christine.

Monique, now 86, was questioned by police in her home on Wednesday, along with her husband, Albert.

The third person in detention is Ginette Villemin, the widow of Michel, Grégory’s uncle. Bosc did not explain why she was arrested.

The prosecutor will decide on Friday whether to charge Jacqueline and Marcel Jacob and Ginette Villemin with complicity in murder, failure to denounce a crime, failure to assist a person in danger and deliberately abstaining from preventing a crime.

The suspects have invoked their right to remain silent. All are from the so-called Laroche wing of the feuding family.

Bernard Laroche, the first cousin, best friend and next-door neighbour of Michel and Ginette Villemin, was the first person charged with Grégory’s murder. He was freed pending trial when the sister-in-law who accused him retracted her testimony.

Grégory’s father, Jean-Marie, shot Laroche dead in March 1985, for which he served four years in prison. Witnesses testified they had seen a moustachioed man and a woman several times near the Villemin home. Laroche had a distinctive handlebar moustache.

Grégory’s mother was then charged with infanticide. She was portrayed as a “witch mother” by media.

The writer Marguerite Duras came to her defence, in the style of Zola defending Captain Dreyfus. “Sublime, obviously sublime Christine V” was the title of Duras’s J’accuse.

A court cleared Christine Villemin in 1993, saying there was absolutely no evidence against her. “Usually they say ‘insufficient evidence,’ ” Bosc noted.

Since the case was reopened at the demand of Grégory’s parents in 2008, investigators have reviewed 12,000 pieces of evidence. They have used software called “Anacrim” to identify inconsistencies in the testimony of 400 witnesses.

“Who was the killer? I don’t know,” Bosc said. “But I think we are nearing the truth.”