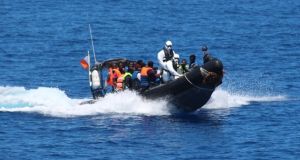 Irish naval vessel the LÉ Róisín has rescued 125 migrants in an operation in the Mediterranean. File photograph: Defence Forces

Irish naval vessel the LÉ Róisín rescued 125 migrants in an operation in the Mediterranean on Monday.

The ship rescued the 107 men and 18 women from a rubber craft about 40 nautical miles northeast of Tripoli, Libya, following a request from the Italian Maritime Rescue Co-Ordination Centre.

A Defence Forces statement said the operation began at 10.47am and finished at 2.45pm.

The LÉ Róisín departed Haulbowline, Co Cork, on May 1st to join humanitarian search and rescue operations in the Mediterranean as part of a bilateral agreement with Italy.

The vessel is the fourth Naval Service patrol ship to engage in operations in the region since May of last year, following the LÉ Eithne, LÉ Niamh and LÉ Samuel Beckett.

It is one of three naval ships that will be sent this year on 12-week rotations.

Last year, some 8,592 migrants and refugees were rescued by Irish Naval Service vessels.

More than 700 migrants and refugees have died already this year attempting to cross into Europe via the Mediterranean, according to the International Organisation for Migration.

This is a 50 per cent increase on the same period last year.