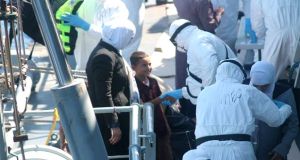 The bodies of 14 migrants have been discovered by the crew of the Naval Service patrol ship LÉ Niamh during a joint rescue of over 500 people from a wooden barge in the Mediterranean.

The 14 bodies were found below the deck of the barge during a search by the LÉ Niamh crew, after it took 210 people, including 35 children, from the barge some 80 km north-west of Libya on Monday evening.

Another 312 people were taken on board the Medécins Sans Frontières (MSF) vessel MV Dignity 1, which was tasked with the LÉ Niamh by the Italian maritime rescue co-ordination centre.

The barge is believed to have left Tripoli in the early hours of Monday and a combination of overcrowding and exhaustion may have caused the fatalities,according to the Defence Forces.

It is the first time since the Naval Service began its humanitarian search and rescue missions in the Mediterranean this summer that it has encountered fatalities.

The LÉ Niamh now has 453 people on board, as it was involved in an earlier rescue of 243 people, and is en route to the port of Messina in Sicily.

Its crew has been offering food, water and medical attention to the migrants on the ship’s deck. MSF said that the 312 it rescued were from Morocco, Sudan, Palestine, Syria, Eritrea, Pakistan and Bangladesh. The LÉ Niamh under the command of Lieut Cdr Daniel Wall has rescued 1280 migrants to date since it took over from the LÉ Eithne in the Mediterranean earlier this month.