Juppé says he will not replace Fillon in French presidential race 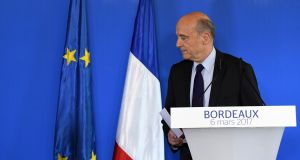 Former prime minister of France Alain Juppé prepares to step down from the podium after announcing at a press conference on Monday that he would not seek to replace Francois Fillon as the centre-right candidate in the presidential election. Photograph: Mehdi Fedouach/AFP/Getty Images

The man seen as a possible saviour of France’s centre-right has disappointed supporters by announcing he will not stand in next month’s presidential election.

Former prime minister Alain Juppé, who lost Les Républicains’ primary election last November to François Fillon, said it was too late for him to save the party, which is riven with political scandal and the prospect of defeat.

“I confirm, once and for all, that I will not be a candidate in the election for the presidency of the republic,” Mr Juppé told journalists in Bordeaux, where he is mayor.

In a brief declaration, tinged with bitterness, he described the deeply divided situation in which his party finds itself as “a waste”.

Mr Juppé said Mr Fillon had “a boulevard in front of him” to win the presidency, accusing him of embarking on “a defence based on claims of a conspiracy and political assassination” against allegations that he employed his wife and children in “fake jobs ” at taxpayers’ expense.

Mr Fillon’s recent statements justifying his refusal to stand down had taken the beleaguered candidate “down a dead end”, Mr Juppé said.

As heavyweights of Les Républicains organise a crisis meeting on Monday, Mr Juppé said calls for him to step into the breach had caused him “to hesitate and reflect”. However, he reiterated it was too late for him to reunite his fractured party.

Nicolas Sarkozy, the former president who failed to progress from the first round of Les Républicains’ primary , said the aim of Monday’s meeting was to ensure a “dignified and credible way out from a situation which cannot last any longer and which is the source of deep concerns among French people”.

Mr Fillon (63) has refused appeals to step aside after revelations that judges are considering putting him and his British-born wife, Penelope, formally under investigation .

Judges are looking into allegations Penelope Fillon and two of the couple’s children were paid almost €900,000 in total for jobs that did not exist.

Mr Fillon has been summoned before judges on March 15th, when he could be mis en examen – the nearest thing in French law to being charged. Mr Fillon had said he would withdraw from the presidential race if he was put under official investigation, but last week went back on this pledge , saying it was for the French people to decide.

He has blamed the socialist government, politically biased judges and the media for his woes, but at a rally on Sunday admitted that while he had not done anything illegal he should not have employed his wife.

The scandal appears to have benefited the centrist, pro-business candidate Emmanuel Macron in particular, as well as far-right Front National leader Marine Le Pen. Polls suggest they will finish in the top two in the first round on April 23rd.

Mr Juppé said the Front National would lead France “to disaster” with its “anti-European fanaticism”, and described Mr Macron’s programme as “weak”. The French left, he said, was “fractured and irreconcilable”.

Mr Juppé said Mr Fillon was showing a determined obstinacy to carry on in the face of widespread defections from his own political camp and plunging polls.

“I am not in a position to bring about the necessary reuniting of the right around a project,” he said.