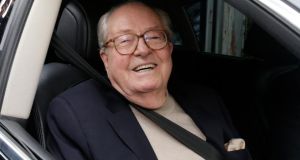 The National Front (FN) announced in a communiqué on Monday evening that it has “suspended” the membership of Jean-Marie Le Pen, who founded the party in 1972.

Mr Le Pen’s daughter Marine replaced him as president of the FN in 2011 and has struggled to shed its image as an extremist, anti-Semitic movement.

The statement said Ms Le Pen will convene an “extraordinary general assembly” by correspondance within three months, with the goal of “abolishing article 11 b of the statutes of the National Front regarding the honorary presidency.” Article 11b made Mr Le Pen “honorary president” for life and can only be revoked by a party congress.

Mr Le Pen angered his daughter by praising the second World War collaborationist leader Marshal Philippe Pétain and reiterating his contention that Nazi gas chambers were a “detail” of history in an April 9th interview with the extreme right-wing weekly Rivarol.