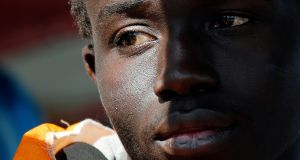 A migrant watches after disembarking from the Norwegian vessel Siem Pilot at Pozzallo’s harbour, Sicily, Italy, March 29th, 2016. Some 730 migrants who had been rescued in various operations in previous days and transferred to a larger ship arrived in Pozzallo today. Photograph: Antonio Parrinello/Reuters

Italian coast guard and navy vessels rescued nearly 1,400 migrants from boats and rubber dinghies in the southern Mediterranean on Tuesday, officials said, indicating numbers of people attempting to reach Europe from Africa were rising as the weather warms up.

About 570 people were rescued by the navy and about 780 by the coast guard, according to tweets from both branches of the military.

Also on Tuesday, some 730 migrants who had been rescued in various operations in previous days and transferred to a larger ship arrived in the Sicilian port of Pozzallo.

Most of the migrants were from African countries and were believed to have left from Libya, which is widely lawless.

Officials fear the numbers of migrants trying to reach southern Italy by sea, relatively contained so far this year, will increase as sailing conditions improve in warmer weather.

More than 1.2 million Arab, African and Asian migrants have streamed into the European Union since the start of last year, most of them via Greece rather than Italy after what is a much shorter sea journey from nearby Turkey.

Lincoln Project rejects threat over Kushner and Ivanka billboards 20:11
Coronavirus: Italy and Spain introduce sweeping new restrictions 19:45
Belarusian opposition calls for national strike to oust Lukashenko 18:54
Coney Barrett likely to be voted to US supreme court on Monday 18:49
Effectiveness of Covid-19 vaccine could be known before end of year – Fauci 16:23