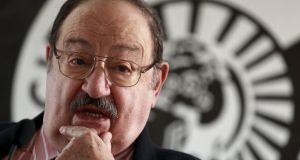 Italian writer Umberto Eco: poses during the presentation of his novel The Cemetery of Prague in Madrid, in this December 13th, 2010 image. Photograph: Reuters

Italian author Umberto Eco, who became famous for the 1980 international blockbuster The Name of the Rose, died on Friday, Italian media reported. He was 84.

La Repubblica newspaper said it had been informed by the family that Eco died late on Friday night at his home in northern Italy.

Eco was virtually unknown outside university circles until well into middle age, when he found himself an international celebrity overnight after he published his first novel, an unorthodox detective story set in a medieval monastery.

“He was an extraordinary example of European intellectualism, uniting a unique intelligence of the past with an inexhaustible capacity to anticipate the future,” Italian prime minister Matteo Renzi said.

For the professor from Bologna University, then aged 48, it was a late introduction into the world of international literary fame and one that took many critics by surprise.

The Name of the Rose, with its highly detailed description of life in a 14th-century monastery and learned accounts of the philosophical and religious disputes of the time, at face value was hardly a novel to appeal to the average modern reader.

But the book’s popularity lay in a clever plot line, the masterfully evoked atmosphere of fear and gloom brooding over the monastery, and the attractive central figure, unashamedly modelled on the famous detective Sherlock Holmes.

As the novel opens an ageing priest, anxious to record the story before he dies, looks back on events that took place in 1327 when as an 18-year-old novice he visited a sinister Italian monastery with his master, Brother William of Baskerville.

During their stay several of the monks are gruesomely murdered and William and his young assistant are soon involved in a detective hunt to track down the villain.

The unusual juxtaposition of a gripping storyline and erudite scholasticism helped to explain why the Name of the Rose was translated into dozens of languages, sold more than 14 million copies and won several international literary prizes.

The book was also the subject of a lavish film production directed by Frenchman Jean-Jacques Annaud and starring Scottish actor Sean Connery as Brother William.

Eco attributed the book’s success to the similarity of experiences shared by mankind in the fourteenth and late twentieth century.

“I hope readers see the roots, that everything that existed then - from banks and the inflationary spiral to the burning of libraries - exists today,” he said in an interview with the New York Times Book Review in 1983.

But he also expressed irritation about the apparent reluctance of the international press to let him move on from that achievement.

“I can’t spend the rest of my life talking about a book I left behind me five years ago,” he once complained.

The novel form was a new departure for Eco, who until The Name of the Rose was best known for his highly academic writings on semiotics, the study of signs, and more topical weekly articles in the influential Italian political magazine L’Espresso.

His last novel, Numero Zero (Number Zero), which was set in an Italian newspaper newsroom, was published last year.

Born in the northwest Italian city of Alessandria on January 5th, 1932, Eco was the son of an accountant employed by a manufacturer of iron bathtubs.

His father wanted him to become a lawyer but he chose instead to study philosophy at the northern University of Turin, where he became fascinated by the medieval world.