Government should have allowed French form of Islam to emerge, says expert 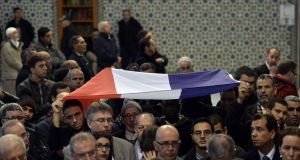 Muslims hold the French flag in the Great Mosque of Strasbourg on November 20th last year to pay tribute to the victims of the Paris terror attacks. Photograph: Patrick Hertzog/AFP

Last year’s jihadist attacks in Paris and the fascination that Islamic State holds for thousands of French youths “is not about the radicalisation of Islam, but the Islamisation of radicality”, Olivier Roy, a professor at the European University in Florence and a leading expert on political Islam told the Anglo-American Press Association in Paris.

Much of the French population seem to have adopted Roy’s theories, which largely exonerate history, French society and the government.

“If it was racism and social exclusion that pushed people towards jihadism, we would have tens of thousands of jihadists, instead of a few hundred today,” he says.

Too little attention is paid to the emerging Muslim middle class in France, Roy argues. “If you go to a hospital in the provinces, a third of the doctors will have Muslim names. If you go into banks, the financial advisers are youths from the banlieues who’ve succeeded.”

Referring to the French ministers of education and labour, he adds, “Even in the government, you have people from the banlieues”.

Had the gunmen who killed 147 people in Paris last year lived in the 1970s, they probably would have joined an extreme left-wing group such as Baader-Meinhof, Roy says. Today’s lost youths, like those of previous generations, are motivated by revolt against their parents’ generation.

“The Baader group revolted in the name of the proletariat, but none of them worked in a factory or had links with local trade unions,” Roy explains.

“Radical young Islamists today revolt in the name of the umma – the world community of Muslims – which they are not part of.”

“The second generation don’t speak Arabic. Their parents have very strong north African accents and have not transmitted familial Islam to their children.  About half the terrorists join with a brother;  there were three sets of brothers in the November attacks in Paris. This shows it’s a generational break.

“These youths are telling their parents: ‘You got it wrong. You don’t know what real Islam is. You’re not a good Muslim. I’ll help you go to paradise’.”

Islamic State’s French recruits don’t have religious backgrounds. “They’re youths completely invested in today’s youth culture. Nightclubs, alcohol, girls, drugs. A significant number are petty criminals. When they go over to Islam, they do it suddenly.”

Roy sets little store by the “deradicalisation” centres now in vogue in France.

“These young people don’t become radical because they were brainwashed,” he says. “They are drawn to radical Islam because it is radical. So offering them nice, well-bred, moderate, teddy bear Islam is absurd.”

The barbarity of Islamic State is quintessentially modern, Roy argues. “Young people are attracted to the heroic narrative, which is conveyed by a remarkably efficient communication system. Islamic State has mastered the cultural code of youth. If you’re into video games, it’s your world. They’re about the aesthetics of violence, similar to Scarface or the Mexican narco-traffickers.”

Roy compares the massacre in the Bataclan music hall last November 13th to the Columbine High School massacre in the US, or Anders Breivik’s rampage in Norway: “The theatricality; the claim of responsibility on the internet; the pleasure of killing. All witnesses described the same coldness.”

Marseille has a high proportion of Muslims, and is a violent city. Yet it has produced few jihadists, Roy notes. “Why are there so few jihadists from Marseille? Because in Marseille you can play with a Kalakshnikov. You don’t have to go to Raqqa. You can kill your enemies and what is more you can go to nightclubs, which you can’t do in Raqqa.”

The two professors make disparaging remarks about each others’ theories. Kepel says 2005, when riots shook the French banlieues and a Syrian-born naturalised Spaniard called Abu-Musab al-Suri published a 1,600-page book titled Call to Global Islamic Resistance was the turning point in the evolution of French jihad.

Nonsense, says Roy. “Nobody read Suri’s book,” he claims. Kepel says Suri argued against al-Qaeda’s spectacular, 9/11 style attacks and advocated seeking easier targets in Europe. “It wasn’t al-Suri who thought up the Paris attacks,” Roy claims. “There was no structural difference between the Atocha train station attacks in Madrid (claimed by al-Qaeda) and the Bataclan.”

Kepel claims the 2005 riots had Islamist overtones, after French police fired tear gas into a mosque. “Islamic State is not the continuation of 2005,” Roy says adamantly.

Yet both academics believe Islamic State may have reached its limits. It is hemmed in by Kurds to the north, Iraqi Shia to the east and Alawites under the protection of the Russians and Iranians to the west, Roy says. To the south, Jordanians, Palestinians and Lebanese have shown little inclination to join the “caliphate”. And the “predatory” behaviour of Islamic State’s “foreign legion” have created difficulties with the millions of Iraqi and Syrian Sunnis under its rule.

Had the French government allowed a French form of Islam to emerge, the faith might not have become a vehicle for radicalism, Roy says. “For 25 years, all the [government] ministers who’ve talked about French Islam have struck agreements with Morocco, Algeria and Turkey. The government wants Islam under the control of the police and the consulates.”

Roy warns against the excess of secular zeal in France. “Believers are told they have to be gay-friendly and promote gender equality. They’re told, ‘You don’t have rights unless you share my values’. This is a profound error. Every society is based on different values . . . We have to leave a space for religion. If you evict religion, that space will be occupied by radicals.”