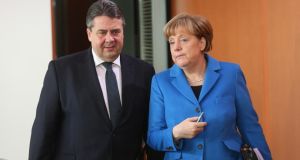 Germany doesn’t go to the polls until 2017 but Social Democrat (SPD) leader Sigmar Gabriel has already given up hope of beating Angela Merkel.

At a “depressing” parliamentary party meeting Mr Gabriel, economics minister in Berlin’s grand coalition, warned it would be a “long time” before Germany had another SPD chancellor.

“Between [Merkel’s] Christian Democrats, the [opposition] Greens and Linke, that leaves us with a potential of 27 per cent,” Mr Gabriel said, according to Der Spiegel.

Since returning to office in December 2013, the SPD has pushed through a minimum wage of €8.50; lowered the retirement age for workers after 40 years; and, last week, established a binding 30 per cent quota for women in boardrooms.

But delivering on its manifesto hasn’t halted a five-point drop on its 2013 election result to just 24 per cent – 17 points behind the CDU. Now the party is gripped by an identity crisis.

After five years at the helm, Mr Gabriel is the longest-serving SPD leader since the still venerated Willy Brandt. But he remains indecisive over the party’s core identity.

He got his party back into power with a left-wing programme in 2013, but SPD left-wingers fear he plans to return to the Schröder-era niche in the political centre – now occupied by Dr Merkel’s CDU.

“We have to be the alternative to the CDU, not just a nicer version,” said Ralf Stegner, a leading SPD left-winger.

An internal study warned of a “grave image problem” and recommended more friction with its coalition partner to improve its profile. Not everyone thinks picking rows with the CDU will be enough.

“The SPD lacks a concept for now and for the future,” said Dr Gero Neugebauer, political scientist at Berlin’s Free University. “Nor can it offer voters the promise of security from the consequences of globalisation.”

One of the few options for the party in 2017 is a three-way coalition with its traditional allies, the Greens, and its little-loved left rivals, Die Linke.

The SPD has always ruled out working with the successors to East Germany’s ruling SED, though that could change with the departure of hard-line figures such as Die Linke deputy leader Sahra Wagenknecht.

But her leaving did nothing to address another problem, said Dr Neugebauer: “German society is shifting right.”