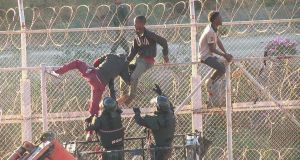 About 800 people have tried to enter Europe by storming a border fence that separates Morocco from Spain’s north African enclave of Ceuta, according to Spanish police.

The incident on Thursday morning followed renewed warnings about Spain’s ability to cope with the rising number of migrants and refugees who have been arriving on its southern coast. It also came just hours before the Spanish prime minister, Pedro Sánchez, was to meet the French president, Emmanuel Macron, to discuss the EU’s response to the migration crisis .

Spain’s Guardia Civil said 800 people from sub-Saharan Africa rushed the fence at Ceuta at 6.35am, using shears and hammers to smash the high, razor wire-topped barriers, and attacked officers.

“In an attempt to stop the Guardia Civil getting close to the break-in area, the migrants ... [pelted] officers with plastic containers of excrement and quicklime, sticks and stones, as well as using aerosols as flame-throwers,” it said .

The force said 602 people had succeeded in reaching Ceuta, of whom 586 had been taken to a temporary reception centre, while 16 were being treated in hospital. Fifteen police officers were also hurt, it added.

Although Spain has been praised for taking in the 630 people onboard the rescue ship Aquarius after it was turned away by Italy and Malta, it is finding it much harder to deal with the thousands of people crossing from north Africa.

Town councils, police unions and NGOs in southern Spain have complained that they simply do not have the resources to deal with the number of people arriving.

The mayor of Algeciras, José Ignacio Landaluce, said the port city was having to divert funds and act as a humanitarian stopgap. He also said the Spanish government and the EU needed to step in to stop the area becoming “the new Lampedusa ” as more and more people landed on the coast.

“I hope the EU is working on a global policy on this: it may be our problem initially, but tomorrow, or in a week’s time, or a month’s, it’ll be at the heart of Europe,” he said.

Carmen Velayos, the secretary general of the United Police union in Cádiz, said the region’s infrastructure had been “overwhelmed” by the rise in arrivals. “Migrants are sleeping wherever they can: the police stations are full, the converted sports centres are full and the reception centres are full,” she said.

“There’s a reception centre for minors in La Línea de la Concepción that’s meant for 30 people. Right now there are 200 little kids there, sleeping on the floor. You’ve even got people sleeping on the decks of maritime rescue boats because there’s nowhere else for them.”

Ms Velayos called for an annual action plan to anticipate the migrant flow and for increased human and material resources: “At the moment, we’re just patching over things.”

Others point out that large-scale arrivals are hardly a new phenomenon on Spain’s southern shores. In 2017, almost 22,000 migrants and refugees arrived by sea – almost four times as many as arrived the previous year.

“This has been going on for more than a decade,” said Carlos Arce, migration co-ordinator for the Andalucían Association for Human Rights . “It’s when more people arrive than usual that you see the defects and failings of the system.”

Mr Arce said the Spanish authorities needed to stop looking at the issue as a policing or border problem and see it instead as a humanitarian imperative. The Aquarius, he said, should serve as an example of what could be achieved with the necessary political focus and resources. “That’s the paradox: the new government has shown there are other ways of doing things if it wants to.”

Mr Sánchez’s recently formed Socialist government has blamed its conservative predecessor for failing to act on the problem, but said it was committed to improving the situation.

“We’re working on an emergency plan to reinforce the system and give more help to the NGOs working on arrivals,” Magdalena Valerio, the minister for work, migration and social security, said on Thursday morning. “I know this is a problem and that the apparatus is being overwhelmed.” – Guardian