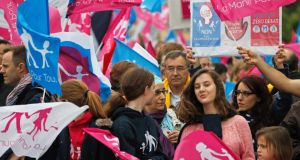 His signature means the first gay marriages may be celebrated in France within about 10 days. Mr Hollande’s office said he signed the bill today, a day after the Constitutional Council struck down a challenge to the law.

Mr Hollande, a Socialist, had made legalising gay marriage one of his campaign pledges last year. While polls for years have shown majority support for gay marriage in France, adoption by same-sex couples is more controversial.

The bill prompted months of widespread protests, largely by conservative and religious groups.

Some were marred by clashes with police. It became a flashpoint for frustrations at the increasingly unpopular Mr Hollande.

The first marriage under the law is due to be held in Montpellier in southern France on May 29th.

France, a predominantly Catholic country, follows 13 others including Canada, Denmark, Sweden and most recently Uruguay and New Zealand in allowing gay and lesbian couples to wed. In the United States, Washington DC and 12 states have legalised same-sex marriage.