Revolutionary government must bear some responsibility for nation’s precarious state 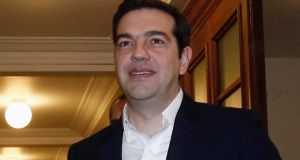 Greece’s prime minister Alexis Tsipras: a ‘victim of the machine he created in his naive haste to seize power before he – and his party – was ready for it’. Photograph: Alexandros Vlachos/EPA

“Thanks to the jealous Powers, the country has been reduced to too great an economic simplicity, and does not have the variety of interests that a civilised society requires. Parents starve themselves to send their sons to university. What is the consequence? We have an educated youth, but no work for it. If our country is to prosper, the Government must be taken to pieces and put together again on a better plan. It must provide our youth with a horizon of opportunity. A new national discipline under which everyone shall have both rights and duties.”

Sound familiar? Greece today? No. It’s from John Buchan’s 1935 novel The House of the Four Winds about the beleaguered fictional Balkan nation of Evallonia. (In a sense all Balkan nations are fictional.) But it reflects the dilemma Greece is in, and the passage could have been written by many an Athens journalist over the past two years, especially the need for youth employment, a sense of transparency and a national narrative.

It reflects the responses of many readers of this column, who either say “Greeks are idle spendthrifts who shirk their responsibilities” or who blame the EU and the International Monetary Fund for Greece’s current problems.

The truth, as always, lies somewhere in between.

The difference between the IMF approach to Greece and its treatment of Ireland during bailout discussions is a textbook case of “attitude”.

Added to this, the crisis over migrants and asylum seekers has shown that Greece’s huge coastline makes the EU’s eastern borders impossibly porous which makes the EU very uncomfortable. Somehow, having hundreds of islands is Greece’s fault.

There are other causes, too. The geopolitics of the Balkan region, with uncertainty and distrust between Greece, Macedonia, Turkey and Cyprus, are inherently unstable. Greece and Turkey have been on the brink of war at least three times since Turkey’s invasion of Cyprus in 1974.

Another geopolitical fact is the increasing investment in the Greek economy by both Russia and China. A possible implosion of the Chinese economy could leave many economies high and dry which, like Greece, are currently vulnerable to enormous Chinese investment: Chile, India, Australia, Canada and west Africa. China controls Piraeus, the biggest port in the Mediterranean and one of the pillars of the Greek economy, and it is only the tip of its investment in infrastructure and resources.

And finally Greece is, in many respects, its own worst enemy. The Syriza government has done little to reduce corruption or tax evasion. German finance minister Wolfgang Schäuble mocked Greece’s efforts to increase efficiency and has influenced IMF scepticism about the viability of the third bailout.

One of the most unsettling aspects of the Syriza regime is the appointment of party faithful to administrative posts, especially in the finance ministry and its tax department, rather than adhering to its policy of appointments based on merit. The attitude seems to be “We’re in charge, we will appoint whoever we like”. “Do as you would be done by” becomes “We’ll do to them what they did to us”.

It is unwise to feel pity for politicians, but, despite all the mistakes he has made, I still find it difficult to see prime minister Alexis Tsipras as a villain. I think he’s more the victim of the machine he created in his naive haste to seize power before he – and his party – was ready for it.

Buchan’s Evallonia was only a preview of the way the Balkan countries have struggled to establish a national narrative which permits self-determination without rivalry. His Evallonians were trying to choose between the old guard (more of the same) and a bunch of hotheads with enthusiasm but no grasp of reality.

They saw that they required more than an energetic, principled but inexperienced leadership to convince the “jealous Powers” of their competency to govern effectively and fairly. Without an acceptable European profile, they would face “diplomatic relations suspended and an economic boycott”. So nothing much has changed.

Greeks know that, to justify their revolutionary young government, they need a new track record in diplomacy, efficiency and reality – and reality is always a two-edged sword in the Balkans.