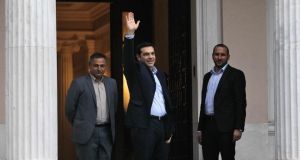 Newly sworn-in Greek prime minister Alexis Tsipras (C) waves to spectators and media as is on his way to enter the prime minister’s offices, the Maximos Mansion, in Athens on Monday. Photograph: Orestis Panagiotou/EPA.

Greek left-wing leader Alexis Tsipras was sworn in on Monday as the prime minister of a new hardline, anti-bailout government determined to face down international lenders and end nearly five years of tough economic measures.

The decisive victory by Mr Tsipras‘ Syriza in Sunday‘s snap election reignites fears of new financial troubles in the country that set off the regional crisis in 2009. It is also the first time a member of the 19-nation euro zone will be led by parties rejecting German-backed austerity.

Mr Tsipras‘ success is also likely to empower Europe‘s fringe parties, including other anti-austerity movements across the region‘s economically-depressed south. The trouncing of the conservatives represents a defeat of Europe‘s middle-ground political guard, which has dallied on a growth-versus-budget discipline debate for five years while voters suffered.

“We have an uphill road ahead,“ Mr Tsipras told president Karolos Papoulias just before being sworn in as prime minister in a ceremony that eschewed the traditional oath on a Bible and blessing with basil and water. He met Greece‘s Archbishop Ieronymos to say he planned to take a non-religious oath.

Within hours of victory on a campaign of “Hope is coming!“, the 40-year-old Mr Tsipras sealed a coalition deal with the small Independent Greeks party which also opposes Greece‘s EU-IMF aid programme though the two parties are at odds on many social issues like illegal immigration.

Both IMF head Christine Lagarde, who said the Fund would continue supporting Greece, and the chairman of the eurogroup of euro zone finance ministers, Jeroen Dijsselbloem, said they wanted to work with the new government.

Minister for Finance Michael Noonan said there could be some room for a deal to adjust debt maturities and cut interest rates rather than writing the debt off.

Syriza won 149 seats in the 300-seat parliament, leaving it just two seats short of an outright majority and in need of a coalition partner. The Independent Greeks won 13 seats.

The alliance is an unusual one between parties on the opposite end of the political spectrum brought together by a mutual hatred of the 240-billion-euro bailout programme keeping Greece afloat at the price of budget cuts.

The alliance suggests a hardline stance against Greece‘s creditors, who have dismissed Mr Tsipras‘s demands for a debt writeoff and insisted the country stay on the path of reforms and austerity to get its finances back on track.

“At first sight this looks like a very strange marriage, but both parties share a strong opposition to austerity,“ said Diego Iscaro, an analyst at IHS Global Insight.

Yanis Varoufakis, an outspoken crusader against austerity and a blogger, was expected to become finance minister when the cabinet is unveiled on Tuesday, senior party officials said.

“The people of Greece gave a vote of confidence to hope,“ economist Mr Varoufakis wrote on his blog. “They used the ballot box, in this splendid celebration of democracy, to put an end to a self-reinforcing crisis that produces indignity in Greece and feeds Europe‘s darkest forces.”

Reaction from financial markets to Syriza‘s victory was largely muted, with the euro recovering from a tumble to an 11-year low against the dollar on initial results. Greek stocks fell 2.7 per cent while 10-year bond yields rose but stayed below the levels seen in the run-up to the vote.

For the first time in more than 40 years, neither the New Democracy party of Mr Samaras nor the centre-left PASOK, the two forces that had dominated Greek politics since the fall of a military junta in 1974, will be in power, beaten by a party that has until recently always been at the fringe.

Mr Tsipras also intends to talk to the heads of two other parties, the centrist To Potami and the communist KKE to seek outside support for his coalition.

Together with last week‘s decision by the ECB to pump billions of euros into the euro zone‘s flagging economy despite objections from Germany, Syriza‘s victory marks a turning point in the long euro zone crisis.

It signals a move away from the budgetary rigour championed by Germany as the accepted approach to dealing with troubled economies, though it is unclear the extent to which Syriza will be able to wring concessions and aid from creditors.

Italian economy minister Pier Carlo Padoan said the message from the Greek election was the need for more growth and jobs, and to find an equilibrium between that and budget rigour.

But after the euphoria of election night Mr Tsipras faces daunting challenges and can expect strong resistance to his demands from Germany in particular. A series of European policymakers urged Syriza not to renege on commitments.

“There is no room for unilateral action in Europe, “ ECB executive board member Benoit Coeure told Europe 1 radio,“ saying it was important to play by the “European rules of the game“.

Those who congratulated Mr Tsipras included European Commission chief Jean-Claude Juncker, who last month broke with tradition of not voicing an opinion on the internal affairs of a member state by warning Greeks not to vote in “extremist“ forces.

With Greece unable to tap the markets because of sky-high borrowing costs and facing about €10 billion of debt payments this summer, Mr Tsipras may find himself with limited room to fight creditors.

During campaigning, he promised to immediately end the huge budget cuts and heavy tax rises that have helped send unemployment to over 25 per cent and pushed millions into poverty. But the new prime minister will also need a deal to unlock more than €7 billion of outstanding aid to make debt payments in the summer.