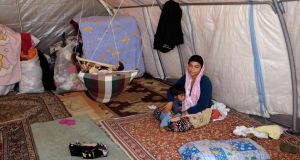 A Syrian Alawite refugee woman sits with her children in a tent at the courtyard of Pirsultan Abdal Cemevi in Istanbul on October 11th last. Turkey has registered more than 600,000 Syrian refugees. Photograph: Murad Sezer/Reuters

Syrian refugees detained by Greek police last month say they were beaten and denied food and water during a 12-hour detention period.

“Mohammad”, a medical professional from the Syrian city of Hama, said he and five others sought the help of smugglers to get from Istanbul to Sweden via Greece last month. However, within hours of reaching Greece, they found themselves being beaten by border police, forced on to a boat and covertly returned to Turkish territory under cover of darkness.

“What we suffered there, it was like shaking hands with the devil,” he said from an apartment in central Istanbul.

“Some countries say they are ‘friends of Syria’. They are liars.”

Attempts by migrants to reach EU countries have resulted in hundreds of deaths in recent weeks.

On October 3rd, more than 360 African migrants drowned when their boat caught fire and sank off the coast of the Italian island of Lampedusa. On October 11th, at least 33 people drowned in Maltese waters after their vessel capsized. Many were refugees fleeing the conflict in Syria and survivors claimed their boat was fired on by Libyan smugglers.

Thousands of illegal migrants and refugees have made their way to Greece over the past 12 months, particularly as the humanitarian crisis caused by Syria’s 36-month uprising-turned-war worsens.

Turkey shares a 440km (273-mile) border with EU member states Greece and Bulgaria, where, in places, refugees such as Mohammad can walk straight through.

Upon being returned to a swamp on Turkish territory, Mohammad, who asked not to be identified by his real name as his family remains in government-controlled Syria, said he and about 25 others refugees thought they would die after being abandoned by Greek police.

He said they had no idea where they had ended up because of the inhospitable surroundings. Mohammad and his five companions lost €2,550 in payments to smugglers.

‘Push-back operations’
Rights groups say this is not the first time Greek authorities have been accused of mistreating migrants and asylum seekers. Amnesty International Greece said it had collected “an alarming number of testimonies from migrants, documenting push-back operations conducted by the Greek border [police] and coastguards”.

“International and EU law prohibit the forcible return [re- foulement] of refugees and asylum seekers to the country they fled or push them back at the border,” said Amnesty Greece spokesman Maro Savvopoulou.

“The laws also prohibit the collective expulsions, namely the deportation of groups of irregular migrants, without looking at each case individually and without considering the individual circumstances of each person separately.”

EU human rights commissioner Nils Muižnieks, who met Athens mayor George Kaminis last month, told The Irish Times he believed Greece’s police services needed changing. “What I think is still necessary to accomplish is an overhaul of the police system based on effective training of police officers on human rights issues,” he said.

“Greece is bound by the European Convention on Human Rights and the UN convention on refugees, which set clear standards of protection for asylum seekers. The police, as well as all state agents, are therefore under the obligation to treat them humanely and provide effective access to asylum.”

Greece has been wracked by unemployment and broader economic woes since a bailout was agreed with the International Monetary Fund and the EU in May 2010. Its dozens of islands and many shorelines mean it is often a prime destination for refugees and asylum seekers looking for support in other EU states.

Christos Parthenis, a spokeswoman for the Hellenic police force, said Greek border police tried to alert their Turkish counterparts before immigrants made it to Greek territory.

“Those who are entitled to international protection will be taken to a speedy and fair process. The rest will have to return with dignity to their homes,” he said, adding that Greece was a country “that respects human rights”.

Refugees in Turkey
Turkey, an open backer of the Syrian political and military opposition, shares a 900km (560-mile) border with Syria and has registered more than 600,000 Syrian refugees. Thousands more are believed to be unregistered and living in Istanbul and cities in Turkey’s southeast.

Since violence flared in March 2011, more than two million Syrians have registered as refugees. Sweden is the only EU member state currently offering permanent residency to Syrian refugees. In September, Minister for Justice Alan Shatter announced the State had granted asylum to about 50 Syrian nationals. The United Nations High Commissioner for Human Rights last week called for all Syrians fleeing the unrest to be allowed the right to seek asylum overseas.