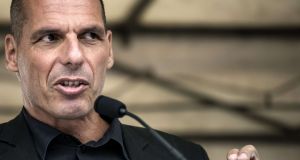 The event which combines economics and comedy will begin on November 5th. Now in its sixth year, it was co-founded by McWilliams and Naoise Nunn.

“I am delighted to announce Yanis Varoufakis will open Kilkenomics on Nov 5th,” McWilliams tweeted on Thursday.

Mr Varoufakis will be in conversation with McWilliams in St Canice’s Cathedral, with a capacity of 640 people, on Thursday, November 5th.

He had been replaced as finance minister by Euclid Tsakalotos.

Other contributors coming to Kilkenny for the five-day event include Martin Wolf, the Financial Times’ chief economics commentator and Nassim Nicholas Taleb, author of The Black Swan and Distinguished Professor of Risk Engineering at New York University.

Details of the events are available at kilkenomics.com