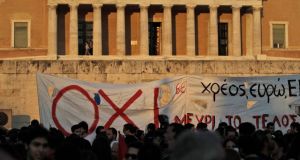 Anti-austerity protesters demonstrate in front of the Greek parliament in Athens on Monday. Prime minister Alexis Tsipras returned from Brussels to a gathering storm at home. Photograph: Orestis Panagiotou/EPA

If Alexis Tsipras thought his long night of fraught negotiations with EU leaders was rough going, it was nothing compared to the gathering storm that awaited him on his return to Athens.

Before boarding his plane, the Greek prime minister, weary and bruised after his 17-hour ordeal, gave a short statement in which he returned a dozen times to the metaphor of battle. His government had fought for six months to achieve the best possible outcome for the Greek people. It had fought to carry out the mandate it had received from its electorate, and it had taken the fight to powerful adversaries who wanted Greece out of the euro zone at any cost.

The bellicose rhetoric couldn’t mask the unspoken implication, which was that, in the battle just ended, Tsipras had fought and lost. Under intolerable pressure, he had grudgingly agreed to intrusive outside supervision, scrubbed out long-guarded red lines and accepted a raft of spending cuts, tax hikes and asset sell-offs on a scale far greater than those set out in proposals he had roundly rejected just two weeks ago. Now he faces the fight of his life to push all of this through parliament.

A rebellion of Syriza MPs has been on the cards since the early hours of Saturday, when 17 of the party’s deputies either voted No, abstained or failed to show up for a vote authorising Tsipras to negotiate with Greece’s lenders. Another 15 indicated over the weekend that they would not vote for specific austerity measures.

Given that abstentions are not counted as No votes, Tsipras technically retains his majority in parliament. In reality, however, he is already dependent on the support of the opposition. And, if the furious reaction from Syriza’s far left is any guide, he will need his political rivals’ support to enact the legislation the creditors have demanded he introduce by tomorrow as a condition for opening talks on a new bailout.

By late last week, with its economy in a tailspin and cash running out, Greece had reached what Tsipras called “the burning zone”. He had to make a decision. And given that Syriza had no mandate to bring Greece out of the euro, he was left with no choice.

At the same time, however, Tsipras insists he can point to several significant wins.

The first is on easing the debt. In the Brussels deal, the euro group “stands ready to consider” steps aimed at ensuring Greece’s debt is sustainable. The commitment is vague and it is contingent on Greece fully implementing the initial stages of its bailout programme, but it did not appear in the draft presented by the creditors in late June.

Second, Tsipras points out that the deal rejected in the referendum was for a five-month financial lifeline, after which Greece would have had to negotiate another long-term bailout. This time, in exchange for broadly similar cuts and tax hikes, Greece will be funded for three years. The measures he accepted were recessionary, Tsipras conceded, but he hoped that the €35 billion growth package he secured, combined with debt restructuring, would create market confidence “so that investors realise that fears of a Grexit are a thing of the past, thereby fuelling investment, which will offset any recessionary trend”.

When he returned to Athens yesterday, Tsipras went straight into a round of meetings with senior party figures. Some of his allies speculated that he may move as early as today to sack senior rebels.

If the package is to be passed, however, Tsipras must either retain his majority, lose it but hold on with help from the opposition, or form a government of national unity which he may or may not choose to lead. Either way, just about the only certainty to emerge from the Brussels deal is that it has brought a Greek election closer.