US safety net keeps Puerto Rico from becoming another Greece

When the commonwealth’s economy faltered, it automatically received aid from US 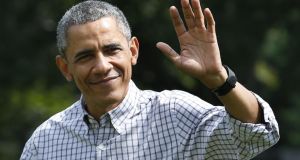 US president Barack Obama: why have the human consequences of economic troubles been muted? The main answer is that Puerto Rico is part of the US fiscal union. Photograph: Uri Gripas/AFP/Getty Images

On Friday the government of Puerto Rico announced it was about to miss a bond payment. It claimed that, for technical legal reasons, this wouldn’t be a default, but that’s a distinction without a difference. So is Puerto Rico America’s Greece? No, it isn’t, and it’s important to understand why.

Puerto Rico’s fiscal crisis is basically the byproduct of a severe economic downturn. The commonwealth’s government was slow to adjust to the worsening fundamentals, papering over the problem with borrowing. And now it has hit the wall.

What went wrong? There was a time when the island, an unincorporated United States territory, did quite well as a manufacturing centre, boosted in part by a special federal tax break. But that tax break expired in 2006, and in any case changes in the world economy have worked against Puerto Rico.

These days manufacturing favours either very-low-wage nations or locations close to markets that can take advantage of short logistics chains to respond quickly to changing conditions. Puerto Rico’s wages aren’t low by global standards. And its island location puts it at a disadvantage compared not just with the US mainland but with places like the north of Mexico, from which goods can be quickly shipped by truck.

The situation is exacerbated by the Jones Act, which requires that goods travelling between Puerto Rico and the mainland use US ships, further raising transportation costs.

Puerto Rico, then, is in the wrong place at the wrong time. But here’s the thing: while the island’s economy has declined sharply, its population, while hurting, hasn’t suffered anything like the catastrophes we see in Europe.

Look, for example, at consumption per capita, which has fallen 30 per cent in Greece but has continued to rise in Puerto Rico. Why have the human consequences of economic troubles been muted?

Is Puerto Rico’s status as part of the US all good? A recent report commissioned by the commonwealth’s government argues its economy is hurt by sharing the US minimum wage, which raises costs, and by federal benefits that encourage adults to drop out of the workforce.

In principle these complaints could be right. In particular, even economists who support a higher US minimum wage, myself included, generally agree it could be a problem if set too high relative to productivity – and Puerto Rican productivity is far below mainland levels.

But the evidence that minimum wages or social benefits are really a problem is, as one careful if older study put it, “surprisingly fragile”. Puerto Rico’s low rate of labour force participation probably has more to do with outward migration than with welfare: when job opportunities dry up, young, able-bodied workers move elsewhere, while the least employable stay in place.

You see the same phenomenon in Appalachia, where the disappearance of coal-mining jobs has induced many workers to leave, while the remaining population makes heavy use of the social safety net.

And how terrible is that, really? The safety net is there to protect people, not places. If a regional economy is left stranded by the shifting tides of globalisation, well, that’s going to happen now and then. What’s important is that workers be able to find opportunities somewhere, and that those unable for whatever reason to take advantage of these opportunities be protected from extreme hardship.

There is, of course, the problem of maintaining public services for those who remain. Compared with Europe, the US benefits hugely from having an integrated national budget – but it’s not integrated enough to deal with really big regional shocks. And Puerto Rico faces some risk of a death spiral in which the emigration of working-age residents undermines the tax base for those left, and deteriorating public services lead to even more emigration.

What this tells us is that, even for a part of the US, too much austerity can be self-defeating. It would, in particular, be a terrible idea to give the hedge funds that have scooped up much of Puerto Rico’s debt what they want – basically to destroy the island’s education system in the name of fiscal responsibility.

Overall, however, the Puerto Rican story is one of bad times that fall well short of utter disaster. And the saving grace in this is big government – a federal system that provides a crucial safety net for US citizens in times of need, wherever they happen to live.