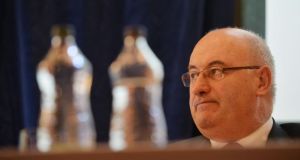 Irish EU Commissioner Phil Hogan said the Greek prime minister had taken “a gamble” on the referendum in the hopes that it would enhance his negotiating position. Photograph: Alan Betson / The Irish Times

Mr Hogan said the Greek prime minister had taken “a gamble” on the referendum in the hopes that it would enhance his negotiating position.

“It’s not easy to persuade 18 countries in the euro zone of a position if they are against you,” he said. “In as the same way, as the Irish and the Portuguese and the Spanish governments had to negotiate a position, Mr Tsipras has found out that negotiating with the euro group is not easy.”

Speaking at Cork Institute of Technology where he gave a keynote address at Asia Matters business conference, Mr Hogan acknowledged that Mr Tsipras and his Syriza party face a difficult challenge. However, he said he believes there will be sufficient support among Greek MPs for the new deal.

“It’s never easy to implement difficult decisions no matter what country you are in but there’s an air of reality that has dawned on the Greek parliament that this is serious business and the European Union does not give money to any country without conditions attached.”

Asked about European-US trade negotiations, Mr Hogan said it will be probably be the autumn before talks enter an intensive phase but matters are complicated by next year’s US Presidential election and the impact that may have on talks.

“It’s a quite difficult negotiation because the US are waiting to see the outcome of Transatlantic Trade and Investment Partnership in the first instance so we haven’t have the opportunity to have had intensive negotiations with the US yet - that will probably arise in September or October.

“There are negotiations this week too but they haven’t been moving too fast - I would be hopeful that we can get a comprehensive agreement but it’s going to be a difficult time line in view of the fact that presidential election matters will start in earnest next February.”