Tsipras to remain in power as Syriza tops Greek poll 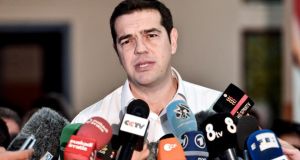 Greeks have decided to grant Alexis Tsipras a second term in office as prime minister in a general election that returned his leftist Syriza party in first place but was also marked by an unprecedented low turnout of 55 per cent.

“We achieved a huge victory; this is the people’s victory. We gave a hard battle,” Mr Tsipras told party supporters last night.

The Greek people had given his party a clear four-year mandate to continue its struggle, Mr Tsipras continued, saying his government had battled “asymmetrical powers” during its seven months in power.

During his speech, Mr Tsipras was joined on the stage by Panos Kammenos, leader of the Independent Greeks, his junior coalition partner which defied many pre-election polls by clearing the 3 per cent parliamentary threshold.

“From tomorrow we will work hard for a Greece of equality and progress in order to have a more powerful and fairer Greece,” Mr Tsipras said.

Poised to take 155 seats in the 300-member parliament, the renewed Syriza-Independent Greeks coalition will have a slim majority, which may see Mr Tsipras come under pressure to invite a third party to join the government.

In the last parliament, the same coalition initially commanded the support of 162 MPs before about a quarter of Syriza MPs began rebelling against Mr Tsipras’s decision to sign up to a third bailout for the country, which precipitated the calling of yesterday’s snap election.

Eight parties are expected to form the new parliament. Golden Dawn, a neo-Nazi party, will be the third largest group in the assembly, after increasing its share of the vote by almost a percentage point to 7 per cent.

The party’s improved result was viewed with dismay by mainstream politicians, especially as it came after last week’s public admission by its leader, Nikos Michaloliakos, on a radio show that his party was “politically responsible” but not “criminally responsible” for the murder of Pavlos Fyssas”.

The stabbing of Mr Fyssas, an anti-fascist musician, by a Golden Dawn member sparked a crackdown on Golden Dawn, whose leadership and dozens of members are now on trial accused of running a criminal organisation.

In fourth place came Pasok on 6.4 per cent, followed by the communist KKE on 5.5 per cent, Potami on 4 per cent, Independent Greeks and the Union of Centrists, a newcomer to parliament elected on its tenth attempt, on 3.5 per cent each.

A major surprise of the election was the failure of Popular Unity, a party formed by rebel Syriza MPs opposed to the new bailout deal, to clear the parliamentary threshold. Its leader, former energy minister Panagiotis Lafazanis, said it had “lost a battle but the war continues”.

Sinn Féin president Gerry Adams last night congratulated Mr Tsipras and said: “The success of Syriza in the general election is all the more remarkable given the appalling treatment of the Greek government by the EU and ECB during the recent negotiations.”