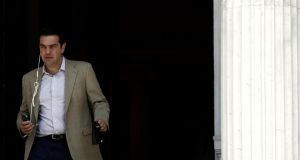 Mr Tsipras moved to clear out the rebels after 39 Syriza hardline lawmakers refused to back the government over the measures, which were demanded by European partners as a precondition for beginning talks over a new bailout.

The main economic ministries remain unchanged, with Euclid Tsakalotos remaining in place at the finance ministry and George Stathakis staying at the economy ministry.

But labour minister Panos Skourletis, one of Mr Tsipras’s closest allies, will replace Mr Lafazanis in the key energy portfolio, where he will be responsible for sensitive privatisation dossiers. Administrative reforms minister George Katrougalos will take over at the labour ministry.

The reshuffle had been expected ever since the party rebellion left Mr Tsipras dependent on the votes of pro-European opposition parties to pass the bailout deal but it is not likely to change the uncertain overall outlook for the government.

Former deputy finance minister Nadia Valavani, another bailout opponent who resigned earlier this week before the vote, was replaced by Tryfon Alexiadis, a leading member of Greece’s tax experts’ union.

The new ministers are expected to be sworn in on Saturday.

Mr Tsipras has ruled out immediate early elections before a bailout deal is actually agreed, but interior minister Nikos Voutsis said this week that elections may come in September or October. – (Reuters)