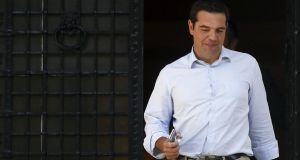 By calling his country’s second general election this year for next month, Greek prime minister Alexis Tsipras is hoping to succeed in his second major political gamble this summer in an attempt to bolster his popularity and secure a mandate to implement Greece’s third bailout deal, which formally began on Thursday.

After winning strong parliamentary backing for the tough bailout deal last week with the help of mainstream opposition parties but at the expense of a rebellion of just over a quarter of his Syriza party’s deputies, Tsipras was widely expected to table a motion of confidence in his government later this month.

But as he could have won such a vote only with the support of other parties, which would have kept him in power but damaged him politically, he has now chosen a more radical path.

His decision to call elections so soon after the start of the third bailout will also wrongfoot his opponents within Syriza, whose demands for the immediate convening of the central party organs were met with the offer of a special congress in September.

That congress is now almost certain not to go ahead, which leaves the viability of the Syriza party as it now exists very much in doubt. In that regard, the election will also determine the future of Tsipras’s party.

With elections now just one month away, the Left Platform within Syriza, which views the third bailout deal as a betrayal of the party’s leftist principles and within which most of the rebel deputies are grouped, will have little time to regroup as a separate political entity if, as expected, its members are excluded from Syriza’s lists.

Speaking shortly before Tsipras’s announcement that he would resign and seek elections, one rebel Syriza deputy expressed his confidence that those who rejected a deal with the country’s creditors in the July referendum would be ready for the election.

“If we go to elections, it is clear that the forces of the proud and overwhelming No [expressed in the referendum] will find a way to express themselves politically through a large anti-memorandum, patriotic and democratic front, which will aim to abolish the memorandum,” said Dimitris Stratoulis, who lost his post as social security minister after voting against the government.

“The struggle would continue,” Stratoulis continued, claiming that “62 per cent of the Greek people are with us”, a reference to the strength of the No vote in the referendum.

Seven months after he came to power on an anti-austerity platform, an overall majority is within Tsipras’s grasp, according to the most recent opinion polls that put his party at more than 40 per cent support, with a 20-point lead. However, as those polls were conducted in July before the third vote in parliament on the the bailout deal, they may not accurately reflect the party’s current popularity.

The timing of the election is also significant as it will be held before many of the most painful conditions of the new bailout programme kick in.

These include another year of the unpopular property tax, which Syriza had vowed to abolish, cuts to pension entitlements, as well as a sharp increase in the agricultural diesel levy for farmers from 6.6 to 20 cent a litre from October 1st.

Politically, Tsipras will also seek to capitalise on the lack of a convincing alternative among the three mainstream opposition parties of conservative New Democracy, centrist Potami and centre-left Pasok, none of which has produced a figure capable of denting Tsipras’s popularity.