Cliff Taylor: Greek growth will be a challenge given higher debt burden from deal 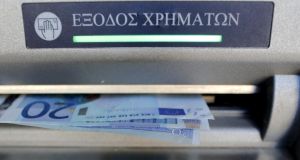 Greek ATMs are running low on cash - the ECB said it would maintain its current level of emergency support but not provide additional funds. Photograph: Christian Hartmann/Reuters

The deal brokered in Brussels in the early hours of yesterday morning followed some 17 hours of talking by EU leaders. Here are the key points:

The Greek government was asked to do more, both in terms of promising additional measures and of introducing some of them as early as tomorrow. The measures fall under a few different headings – additional “austerity” via tax hikes and spending cuts, reforms of the way the Greek economy operates and what might be called “control” measures, giving the EU and the three institutions – the European Commission, the International Monetary Fund and the European Central Bank – an oversight into key parts of running the country and over the disbursement of the proceeds of the sale of Greek assets. The package was extraordinary, beyond what had been discussed to date and resulting from massive pressure on Greece.

The days ahead will show how acceptable this is to the Greek politicians. However, a big issue is what it will mean for the Greek economy. More money is being taken out via tax hikes – for example, in VAT – and spending cuts. These will hit growth. Many of the reform measures may help to improve the economy in the years ahead but will not pay off through growth in the short term. Further budget consolidation was inevitable – sooner or later – but big cuts now, without an immediate move to cut the burden of debt repayment, will prolong recession.

Without growth, Greece’s debt burden will remain unsustainably high and economic problems such as unemployment will increase. Even regaining a semblance of economic stability is now a key challenge. Of course Greek euro exit would itself have caused chaos.

Greece has a very high debt burden, estimated to be about 175 per cent of its GDP. (By comparison, Ireland’s debt peaked at just under 130 per cent of GDP). Greece will now take on some €80 billion in new debt via the bailout programme. Much of this will be used to pay off existing debt, but with an upfront cash requirement to recapitalise the banks, possibly costing up to €25 billion, Greece’s debt looks set to rise further in the short term. Making the debt outlook look sustainable will be a big challenge, particularly as economic growth remains low. The danger is of a continuing cycle of high debt and low growth and ongoing pressure for more cuts and taxes.

Restructuring Greece’s national debt would have improved the economic outlook. Greece would have taken some pain, but with something back on the other side and a clearer signal of a decisive package. However, the summit statement rules out any debt writedown. It says EU leaders will look at pushing out repayments over a longer period when the programme, if agreed, comes up for its first review in a few months’ time. But big extensions would be needed to make a difference to the arithmetic.

The statement after the EU council meeting blamed the problems of debt sustainability on the “easing of policies during the last 12 months”. In reality the story goes back much farther to Greek overspending when it joined the euro and an unwillingness when the first bailout deal was done in 2010 to restructure this debt, imposing losses on lenders as well as the budget.

The spectre of financial collapse was a key issue in the Greek concessions. But getting the banking sector back up and running is now a huge challenge, even within a programme. The first problem is a cash crunch. The ECB yesterday said it would maintain its current level of emergency support to the Greek banking system but not provide additional funds.

More funds will be needed at some time in the coming days if banks are not to run completely out of cash and be threatened with collapse. Reports last night said that the ECB will agree to release more cash in the weeks ahead, given that this would be effectively underwritten by €10 billion being made available immediately by the new EU rescue fund to address problems in the Greek banking sector. This way the ECB’s exposure is being effectively guaranteed by EU governments.

However, lurking now in the background is the need to recapitalise the banks – in other words, to inject more cash into their balance sheets to account for existing losses on their loan books and keep a safety buffer. Half the €50 billion due to be raised by Greece from the sale of key assets will be put into a special fund and used to repay this bank recapitalisation bill. It remains to be seen whether this €50 billion target can be met, given the lack of specifics about what these assets are.

Whatever happens, it will take months to reopen the banks in full and mergers and restructuring will be part of the mix. An assessment of capital needs will not take place until after the summer and in the meantime it is not clear how much funding the ECB will supply, given its rules, which do not require it to provide funds to banks that are insolvent.

Without a functioning banking system the economy will head further downhill.