If Enda Kenny harbours a desire for a big European job, he has done himself no harm 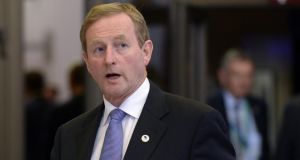 Taoiseach Enda Kenny. His contribution to the debate has can be summed up as : “If we can do it, so can you.” Photograph: Thierry Charlier/AFP/Getty Images

The Taoiseach’s enthusiasm for kicking the Greeks when they are down does not seem to be playing particularly well at home. It belies a national tendency to support the underdog in these situations and a certain sympathy for the Greeks.

To date his contribution to the debate can be summed up as : “If we can do it, so can you.”

Any serious comparison of Ireland and Greece would conclude this is simplistic at best and disingenuous at worst.

However, Enda Kenny has pursued a line to the effect that it was the failure of the Greeks – unlike the Irish – to implement the reforms agreed under their bailouts that brought them to this sorry pass.

It is possible that Mr Kenny just can’t resist the opportunity to rub the noses of Ireland’s left-wing politicians in the utter failure of their Greek counterparts to deliver on any of their populist electoral promises.

If there was an Irish election in the immediate offing this might make some sense, but nobody expects an election this side of the budget in the autumn.

It might be a mistake, however, to assume his remarks are intended for domestic consumption. While Mr Kenny’s comments risk falling flat at home, they will no doubt have been welcomed by some euro zone members, notably Germany and the other states advocating a hard line against Syriza.

How our national interest has been served by doing their bidding in this situation is far from clear. But if the Taoiseach still harbours a desire for a big European job – his name was mentioned in connection with the role of commission president last time round – he has done himself no harm.