Talks on Greek bailout resume as creditors arrive in Athens 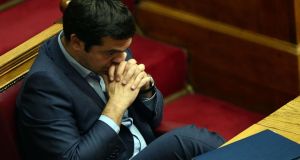 Greece is bracing for the return to Athens of officials representing the reviled “troika” of creditors as the debt-stricken country prepares to start negotiations for a third bailout.

Mission chiefs with the EU, European Central Bank and International Monetary Fund fly into the Greek capital on Friday for talks on a proposed € 86bn bailout, the third emergency funding programme for Athens since 2010.

The return of the triumvirate, a day after internationally mandated reforms were pushed through the parliament by MPs, marks a personal defeat for the prime minister, Alexis Tsipras, who had pledged never to allow the auditors to step foot in Greece again.

How Greeks will react remains unclear, with much depending on media coverage.

“The press will almost certainly make a big deal out of this and the government will try to play it down,” said Aristides Hatzis, a leading political commentator. “But given what people have gone through recently it might seem rather trivial and that is to Tsipras’ advantage. Their presence will definitely reinforce the realisation that another bailout is here.”

Much has changed for Tsipras, the young firebrand catapulted into office on promises to eradicate the biting austerity policies that over five years have created record levels of unemployment and poverty.

In the six months since his election, the radical leftist has been brought face-to-face with the brute force of fiscal rectitude and a German-dominated Europe.

Addressing parliament ahead of the crucial vote, Tsipras, who succumbed to the demands of foreign lenders earlier this month – accepting an ultimatum to find € 12bn of savings, by far the heaviest austerity package to date – conceded that his government had been defeated. But he insisted the alternative – bankruptcy and exit from the euro – would have been catastrophic.

Although the leftist leader urged his Syriza party to endorse the reforms, 36 MPs either voted against or abstained on the measures, three fewer than in a similar vote last week.

Austerity measures range from pension cuts and tax hikes to a new code of civil procedure, with dissident MPs arguing that the changes are incompatible not only with Syriza’s principles and values.

“We are turning our back on our common battles when in essence we say … austerity and giving into blackmail is a one-way street,” said Panagiotis Lafazanis, who heads the Left Platform, the far-left faction around which mutinous MPs rally around.

“Greece does not have a future as a blackmailed eurozone colony under memorandum [bailout],” added the former minister who now advocates a return to the drachma.

The revolt represents a bittersweet victory for Tsipras, who now has to rely on “pro-European” opposition parties to push policies through parliament. Many in the governing party view fresh elections as the only solution.

With some likening the differences of opinion to open warfare, Tsipras issued a thinly veiled warning to Zoe Konstantopoulou, a leading Syriza cadre and speaker of the House who has become the face of anger against the government U-turn.

In a statement released after a meeting between the two, Tsipras said he was troubled by the “institutional discord” that Konstantopoulou was causing by vehemently opposing the new direction. Konstantopoulou told parliament on Thursday that Syriza had been forced “by our so-called partners” to embrace policies it is “diametrically opposed to”.

Acknowledging the split could augur the party’s break-up, the government spokeswoman, Olga Gerovasili, admitted that Syriza “cannot continue like this”.

The minister of state, Nikos Pappas, suggested that Greece was heading for an explosive autumn, saying that the rupture within Syriza would be dealt with once a deal with foreign lenders had been concluded.

The leftist-led government has until 20 August – when it must meet a debt repayment of € 3.4bn to the ECB – to agree a three-year bailout plan.

However, the European commissioner for economic and financial affairs, Pierre Moscovici, has not ruled out a new bridging loan if negotiations are not completed by then.

European authorities provided a similar € 7bn bridging loan to meet debt repayments to the ECB and IMF earlier this week.

Many believe new elections would be catastrophic for Greece given the damage its economy has suffered in the past three weeks, with banks being closed and capital controls imposed.

Although banks reopened on Monday, restrictions remain in place. On Thursday, Greece’s most influential economic thinktank predicted that the economy would contract by 2% as a result of the controls, with Greece remaining in recession next year as well.