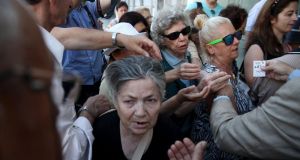 Pensioners are given priority tickets as they wait to receive part of their pensions in Athens, Greece yesterday. REUTERS/Yiannis Kourtoglou

A far-left faction in Greece’s ruling Syriza party denounced the bailout deal as a “humiliation” as the leadership fought to contain a ripple of defections.

The strongest internal criticism came from energy minister Panagiotis Lafazanis, leader of the so-called Left Platform within Syriza, who said the agreement was “humiliating” and should be rejected. “We will fight it,” he said. The terms were also disowned by Syriza’s junior coalition partner, Independent Greeks, whose leader said it could not support the measures but would remain in government.

Prime minister Alexis Tsipras is facing a wave of dissent in his own ranks as he prepares to push a raft of reforms through parliament by tomorrow in order to meet conditions set by Greece’s creditors for talks on a new bailout.

With dozens of Syriza MPs threatening to vote No or abstain in this week’s parliamentary votes, Mr Tsipras could also face a formidable obstacle in the speaker, Zoe Constantopoulou, who plays a key role in the logistics of the voting and has been one of the creditors’ most uncompromising critics.

Senior Syriza figures speculated that Mr Tsipras would sack prominent rebels. Ms Constantopoulou, who defied Mr Tsipras and abstained from a vote on Saturday to authorise him to negotiate, could only be replaced by a no confidence vote.

Under Syriza rules, deputies are supposed to resign their seats if they publicly disagree with government policy, although there is nothing to stop them refusing to stand down and holding onto their seats as independents.

Amid widespread anger at the stance taken by the creditors in Brussels at the weekend, newspapers and politicians focused on what they saw as Germany’s attempts to humiliate Greece as punishment for its resistance to another round of cuts.

“Germany unfortunately for a third time in 100 years is attempting to destroy Europe, ” said Nikos Filis, Syriza’s parliamentary spokesman. “Germany attempted to bring the Greek government down and take Greece outside the euro zone. We had the illusion that democracy works in Europe when it comes to relations between the nations.”

Syriza has been reeling since Saturday, when 17 of its MPs rebelled in a vote on authorising Mr Tsipras to negotiate on the basis of proposals that were significantly tougher than those he labelled “blackmail” when he persuaded Greek voters to reject them in a referendum a week ago.

Mr Tsipras’s allies conceded the deal contained unpalatable measures but said the party had no mandate to bring Greece out of the euro. “There’s a vista of division within the party,” said Yanis Balafas, a Syriza MP who is close to Mr Tsipras. “What matters now is that the worst-case scenario of a default has been averted.”

Labour minister Panos Skourletis, another Tsipras ally, told Greek television he could not blame anyone who felt they could not support the deal. “We aren’t trying to make this deal look better, and we are saying it clearly: this deal is not us,” he added.