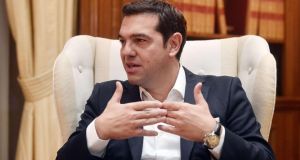 Once they receive their portfolios this week, the ministers of the incoming Syriza-Independent Greeks coalition will have to begin implementing a long list of measures they agreed to when they signed the third, €86 billion bailout programme for the country in August.

The new government will also have to identify equivalent austerity measures worth €400 million by the end of 2016 to compensate for the anticipated abolition of the decision to apply a 23 per cent VAT rate on fees for private education courses and at the ubiquitous frontistiria or grind schools. Introduced in August to counterbalance the lowering of the VAT rate on beef, the imposition of VAT on private tuition was widely condemned during the election campaign, even by Syriza and Independent Greeks candidates.

The incoming cabinet must also apply a host of revenue changes in agriculture, including increasing the levy on farm diesel from 6.6 to 20 cent a litre from October 1st and phasing out farmers’ preferential income tax regime, which will involve increasing their tax rate from 13 per cent to 20 per cent next year to reach 26 per cent by 2017.

Mr Tsipras’s new cabinet will also have to sign off on the legal framework for recapitalisation by up to the €25 billion of Greece’s four pillar banks, which is scheduled to be completed by December.

The exact amount needed to cover their capital shortfalls is expected to be announced next month by the European Central Bank.

The renewed Syriza-Independent Greeks coalition must identify alternative measures to offset a recent court ruling ordering that basic and supplementary pensions must be restored to 2012 levels.

It must also work to phase out a benefit paid to low-income pensioners by late 2019, beginning with the top fifth of beneficiaries next spring, and to introduce penalties on early retirement.

Also in October, the new government must commence a review of labour relations, including the rules on collective dismissal, industrial action and collective bargaining.