Syriza activists struggle to accept terms Tsipras has signed up to

Some remain angry and defiant, while one insists Tsipras is not a traitor 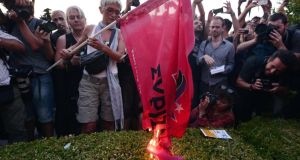 A woman burns the flag of the ruling party Syriza in front of the Greek parliament in Athens. Photograph: Louisa Gouliamaki/AFP/Getty Images

As she left Athens early on Saturday, Maria Kalyviotou was looking forward to spending a fortnight’s holidays in her parents’ village by the sea in the northern part of Evia, a large island about an hour away.

An online journalist with Avgi, a newspaper aligned with the Syriza party led by Alexis Tsipras, Kalyviotou (29) had been through a busy couple of weeks and long days covering the referendum called by the prime minister week before.

“I was really happy as I was driving to my village. But as soon as I got here, I began to wonder why I’d left Athens and Avgi. People were on the streets and what was I doing here? Just swimming?” she says, referring to reaction to the parliament’s decision in the early hours of Saturday morning to approve a tough, €13 billion package of cuts and tax increases.

Then there was the bombshell from Brussels, where the Greek government was being told by its creditors that unless it signed up to even more measures, a Grexit was likely.

“I’ll be honest. In the beginning I was devastated, just devastated,” sighs Kalyviotou, who has been a member of Syriza since 2006. “A few hours later, I began to start feeling really angry as I couldn’t see any rationale in what they [the creditors] were asking. It was punishment, bullying and total arrogance. Then that anger then became will, a strong will.”

The outcome has left her even more determined to fight. “We lost a serious battle but not the ‘war’, and we’re going to fight back. If they think after what they did that we’re just going to sit down and cry, well then they’re stupid. This anger won’t lead to nothing.”

Like Kalyviotou, Syriza activists across Greece spent Monday coming to terms with the fact that their party leader had done something he’d always vowed he’d never do and that they’d never believe he would do: sign up to implement measures that they as a party had protested against for five years.

“As a party member and a citizen, I have to admit that this is the worst day of my life since I became politically aware,” he said, acknowledging that the government had found itself facing an impossible dilemma.

“It’s easy to say we should break with the euro, but the consequences would be massive, for the economy, hospitals and the public sector. But ... what Tsipras signed – and I haven’t seen all the details – contains measures that are the direct opposite to everything Syriza and the left stand for.”

What’s worse is that many of the measures will be impossible to implement. “We’ll be back at the same point in three to five months,” he said,

Two of the creditor’s demands were particularly galling as they represented a “provocation for democracy”: that laws enforcing most of the new measures be rushed through parliament by Thursday and that other laws passed by the government since coming to power but without the lenders’ agreement be rescinded.

He feels sickened that some people are calling Tsipras a traitor. “Those voicing that are outside the party. Within the party, there’s huge anxiety, and huge difficulties, but no one is calling him that.”

Syriza is a broad secular church, taking in many shades of red, from social democrats to socialists to Eurocommunists, and from Maoists and Trotskyists. For one member on the left of the party, the deal is the signal that the fight to reclaim Syriza and ensure it remains loyal to its stated programme must commence immediately.

‘We’ll fight to the end’

He admits to not being totally surprised at events as before January’s election it was clear there was never going to be an “easy” deal with creditors. “The government said it could get rid of austerity and that it could deal with the creditors within the euro zone. Now we can see they were wrong. What we want now is for Syriza to recognise that mistake and to prepare an alternative strategy.”

“It’s in our DNA to be against austerity. We represent the popular classes, with the workers and unemployed and we’ll fight for that till the end.”