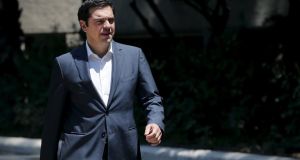 Talks on tying up a new bailout deal for Greece failed to start on Friday as had been expected, with officials blaming security worries for delaying the negotiations with international creditors who are detested by many Greeks.

Greek government officials had said this week that the talks on the third bailout programme worth up to €86 billion would start in Athens on Friday.

But representatives of Greece’s creditor institutions - the European Commission, the European Central Bank and IMF - said they cannot begin until the right location is found, given the talks’ sensitivity and the wide public anger about austerity policies imposed under the first two bailouts.

“There are some logistical issues to solve, notably security-wise,” a European Commission official said. “Several options are on the table,” the official said, without giving more details.

The Greek parliament has already approved two packages of reform measures, a prerequisite for starting the formal negotiations to hammer out details of the new bailout.

However, another source close to the talks said Greece had been asked to do more on reforms before top international officials could come to Athens.

The government of leftist prime minister Alexis Tsipras held five months of acrimonious talks with the creditors before they finally offered to start talks on a new bailout - and only after the government missed a debt repayment to the International Monetary Fund and had to close local banks for three weeks.

Mr Tsipras accepted the creditors’ terms even though Greek voters had rejected an earlier offer in a referendum.

Athens hopes this time the negotiations will be quick and can be concluded by August 12th so the deal can get parliamentary approval before a bond repayment to the ECB falls due on August 20th.

At the moment, only technical talks are underway to sort out logistical issues. One government official said he hoped negotiations with the institutions’ mission chiefs could start on Saturday.

A European Commission spokeswoman said only that negotiators from the institutions, including the European Stability Mechanism rescue fund, were expected to go to Athens “in the coming days”.

Sensitivities are high in Greece over the presence of top officials associated with the much-hated austerity policies which deepened the country’s long economic depression.

Mission chiefs from the Commission, ECB and IMF have not been back since Mr Tsipras’s Syriza party came to power in January, with the then finance minister Yanis Varoufakis insisting at the time talks should take place in Brussels.

Mr Varoufakis, who has since left the government and attacked the reforms, had said in May that “motorcades” of the creditors’ representatives moving around the Greek capital were humiliating.

When they get underway, the bailout talks will deal both with a new memorandum of understanding on actions Greece has to take and with the loans it should obtain in return.

Greece’s creditors want to see it agree and implement tax increases, spending cuts and economic reforms in return for the third bailout.

In a sign of the problems faced by Greece and its lenders, the country’s most influential think tank predicted on Thursday a sharp drop back into recession.

The extent of the IMF’s participation is still unclear once its current programme expires next year. It says Greece’s public debt must be restructured if the bailout is to have any chance of success but faces resistance from its EU partners.

The government will send on Friday a specific request to the IMF to invite it to the talks, a government official told Reuters after the fund’s spokesman Gerry Rice said on Thursday this was required or a new programme.

“The IMF is the most difficult of the institutions, with the harshest terms,” government spokeswoman Olga Gerovasili told Skai radio.