Schäuble says he believes Greece would be better outside euro 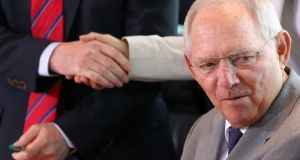 German finance minister Wolfgang Schäuble has admitted on national radio he believes Greece would be better outside the euro, where it could restructure its debts.

In a remarkably frank interview Dr Schäuble admitted in public his private view for some months and conceded that he disagreed with Chancellor Angela Merkel on this point.

But he said he would bow to her wishes and urge Bundestag MPs “with full conviction” to back talks for a third bailout on Friday in the Bundestag.

“Many economists ... are listening to what the IMF says, which doubts that Greece’s problems can be solved without a real debt haircut,” he said. “But a real haircut is incompatible with membership in a currency union.”

Given these contradictory positions, he said a Greek exit to restructure its debts is an option that must be considered.

A proposal from Dr Schäuble’s ministry at weekend talks in Brussels, to allow a “temporary” exit if ongoing talks break down, was removed by leaders in the final agreement reached after all-night talks ending on Monday morning.

“We haven’t said we are going to force that on anyone, we couldn’t we don’t want to, no one has suggested that,” he said, “but perhaps that would be the better way. And that’s something increasing numbers of people are saying in Greece.”

Asked if he disagreed with Chancellor Merkel on the strategy with Greece, in particular a so-called Grexit, he said: “Yes, but that is part of democracy that one has different opinions and discuss them with each other.”

Dr Schäuble called last night’s Greek vote an important step in the process to a third bailout package but expressed publicly doubts he has long harboured in private over whether an additional package makes any sense.

He said it was “confusing” that the Athens parliament had backed a third package with conditions tougher than the second, rejected in a referendum 10 days ago.

“But whatever,” he said, “Greece is in a very difficult situation and this is an important step.”

If today’s eurogroup meeting agrees that the Athens reform vote meets the terms of Sunday’s euro leader meeting, Dr Schäuble said he would ask the Bundestag on Friday for a mandate to begin talks.

Asked why, like Greek prime minister Alexis Tsipras, he was urging the Bundestag to back a programme he doesn’t believe in, he said: “I don’t know if Mr Tsipras would like to be compared to me. He is a head of government, I am finance minister.”

In the radio interview Dr Schäuble denied euro finance ministers were prepared to “bend” ESM laws to release financing to one country when, according to the bailout fund rules, the precondition for activation is a widespread existential threat to the euro zone as a whole.

Dr Schäuble conceded that finance markets were less nervous now than in the past about instability in Greece spreading to other member states “But you cannot rule out that the insecurities will result from the developments,” he said. “And there is a certain nervous tension about how the decision will go, look at the media attention in Greece. Thus I think this is something one can talk about without talking about bending the law.”

For the German finance minister the greater problem lies in another precondition for ESM activation: establishing that debts are sustainable. This precondition brought the discussion back to the issue of a Greek haircut which, he repeated, he did not see as possible inside the currency union.

“This is a difficult problem and that is why one will make an effort to see if one can find a solution,” he said. “I don’t see it but we are beginning the negotiations and don’t know how the result will look.”

Asked why he thought Mr Tsipras had not accepted the offer of a euro “timeout” in weekend talks, Dr Schäuble said he believed the Greek leader wanted to remain true to his election promise of keeping Greece in the euro zone.

Amid all the uncertainty, the German finance minister said he was “very very happy” by the call from French president Francois Hollande for an “economic government” for the euro zone.

The idea has been flagged many times in the past, including by Dr Schäuble, but has always floundered due to lack of interest in many capitals and differing views between Berlin and Paris on what lies behind the term.

Dr Schäuble said he remained convinced the currency union must develop further, but this could not happen without further integration through treaty change.

“This is not easy to achieve and naturally one has to transfer to Europe parts of competences that were previously with member states,” he said.

Describing it as a “good sign” that France, always more hesitant in this matter than Germany, was now reviving the idea, he said:

“It shows that crises, such as the one we have with Greece, are always a chance to move a step further to make Europe stronger.”