Paul Gillespie: A rerun of the Treaty of Versailles or of Brest-Litovsk?

Too soon to see in Greek ‘surrender’ an historical turning point 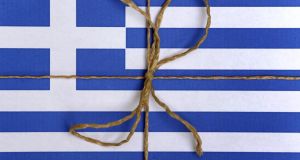 Bail-out, bail twine ... the Greek flag is bound up with a parcel string to illustrate ‘bailout package” in Kaufbeuren, Germany. Photograph: EPA/Karl-Josef Hildenbrand.

Does the Greek crisis represent a decisive moment in European integration, turning away from a Europe of equals and resurrecting 19th century relations of power in a modern guise?

Many critics have concluded that this is so following last weekend’s imposition of such severe conditions on Greece in return for an €86 billion bailout loan. The ruthless manner of the negotiations and the imperative tone of the document bear out that judgment. So does Greek prime minister Alexis Tsipras’s comment that he had to choose between a bad deal and an even worse catastrophe of exiting the euro, which few Greeks want.

His surrender to that choice evokes win/lose scenarios redolent of 19th century conflicts, not the win/win ones which European integration’s consensual approach supposedly substitutes for that imperial past.

The Treaty of Versailles, which imposed punitive terms on a defeated Germany in 1919, is evoked. Another treaty, that of Brest-Litovsk in 1918 by which the Bolsheviks renounced Ukraine, the Baltic states, Finland and Poland in return for a humiliating peace with Germany, is also relevant; this was a strategic retreat to consolidate their power, not a defeat.

For the European left, of which Tsipras and his Syriza party so much want to remain a part, this may be a more appropriate comparison than the Versailles defeat.

He won Wednesday night’s parliamentary debate on the agreement by roughly the same two-thirds plus margin which, according to polls, the Greek people people accept it by. Coming at the cost of 38 Syriza votes, the vote heralds a possible split in its ranks, a government reshuffle and a possible election. Greece could then end up with a reconstituted social democratic party led by Tsipras and a radical left opposition opposed to euro membership and demanding a sovereigntist development programme outside it.

That is a sharp politicisation of European issues in their domestic arenas – readily seen in the injection of Greek issues in to Irish debates. Whether the Greek outcome disadvantages Sinn Féin and the hard left here and Podemos in Spain remains to be seen.

Thus a full evaluation of these dramatic events awaits the further working out of the new entangled domestic and Europeanised politics in Greece and elsewhere.

To understand what is happening two dimensions of the processes involved can be distinguished: system and social integration. System integration concerns the core institutional order of a society and its legal space, whereas social integration deals with the social actors involved.

Applying this approach to the EU, it can be seen that the Greek crisis vividly exposes the shortcomings of the euro zone’s design as a monetary system without a fiscal or political union. That the impressive efforts to develop a banking union and more strictly co-ordinated domestic budgetary rules since 2010 do not add up to that complete design is a criticism frequently made by economists.

Germany resolutely refuses to accept debt write-offs or fiscal transfers as part of the system, insisting instead on these rules. Whether the euro zone can survive as an inclusive core including north and south in such a minimal way without further treaty change is put at issue by this crisis in the EU’s institutional system and legal space.

The EU’s social integration is also problematic. Surveys show most EU and euro zone citizens want to see greater social and political links but also reveal deficits of trust, accountability and democratic legitimacy between them and the EU’s institutional order. The Greek crisis plainly expresses the discordance.

Resolving these contradictions involves tackling both the systemic and social deficits and bringing both more into line with one another. Neither task is resolved and both problems are reinforced by the Greek crisis. They will be worked out in economic difficulties and political and social struggles still to come.

Hence it is premature to say this moment is the definitive one in that drama. pegillespie@gmail.com