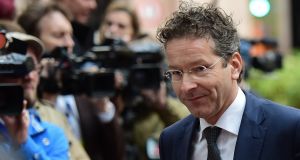 Euro zone finance ministers have withheld a €2 billion loan disbursement due to Greece, though they signalled the money could be unlocked early next week if key reforms are made.

Yesterday’s eurogroup meeting in Brussels had been scheduled to sign off on the latest disbursement under the third Greek programme. However, a delay in implementing a number of reforms in Athens, including controversial measures to repossess homes from people who have fallen into arrears, has delayed the process.

A meeting of senior officials representing the eurogroup will take place next Monday at the latest to assess the matter, eurogroup president Jeroen Dijsselbloem said after Monday’s meeting.

The government has met resistance from the troika of lenders, who say some mortgage holders will exploit the measures.

“We must find the right balance between protecting the most vulnerable and also that those who may be strategic defaulters could not benefit from these protections,” EU economics commissioner Pierre Moscovici said after the meeting.

On Friday the Greek government passed a number of “prior actions” demanded by the international lenders in exchange for the €2 billion, including a change to the way pensions are calculated and a reduction in tax breaks for farmers. But the proposal presented to deal with householders in arrears was deemed too generous by bailout monitors.

Last week the European Central Bank announced that the four main Greek banks need up to €14 billion in fresh capital by the end of the year.

The third Greek bailout thrashed out over the summer had envisaged a €25 billion bank recapitalisation, following the crisis in the Greek banking system sparked by the imposition of capital controls in June.