More than 2,000 refugees held in stadium as Italian vessel rescues 50 from sea

Scuffles break out among migrants queuing for immigration papers on the Greek island of Kos, which has seen a surge of migrant and refugee arrivals in recent weeks. Video: Reuters 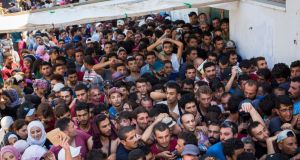 Syrian migrants and refugees at the detention centre at an abandoned football stadium. Photograph: Photo/Alexander Zemlianichenko/AP

More than 2,000 refugees in Kos have been locked in a stadium, after riot police struggled to contain crowds of recent migrant arrivals rounded up from makeshift camps around the Greek island.

On Wednesday afternoon, after being locked inside for about 18 hours, the mostly Syrian and Afghan refugees were fainting at a rate of four each hour, aid workers said.

About a thousand of the refugees are trapped inside a playground within the stadium complex, with no access to water or shade. A further 1,500 are housed in a separate section of the stadium, with some protection from the sun.

Constance Theisen, a team leader for Médecins sans Frontières, which was providing medical care at the stadium, told the Guardian: “We have unconscious people coming out of the playground area, being carried by their friends and family, every 15 minutes. It is absolutely out of control. Nobody understands the sense behind it, or if there is any (sense) at all.”

One of the migrants suffered an epileptic seizure, the aid group said.

The migrants were originally locked inside on Tuesday night ostensibly to be registered. But, according to MSF, just three police officers were there to carry out the registration, slowing the process down and exacerbating tensions.

At one point the police used a sonic explosion to maintain order, and the MSF team withdrew for safety reasons. “It was becoming a bit uncontrollable, the situation, and there was a complete lack of coordination. It was just the police there, no UNHCR [the UN’s refugee agency], and no security for [OUR]team,” said Julia Kourafa, a spokeswoman for MSF at the stadium.

MSF returned early the next morning to provide medical assistance, but the refugees remained locked inside. Little, if any, food or water had been supplied by the Greek authorities and refugees continued to faint.

Kourafa added: “This is the first time we’ve seen this in Greece – people locked inside a stadium and controlled by riot police. We’re talking about mothers with children and elderly people. They’ve been locked in there after many hours in the sun.”

Tensions were also rising fast on several other eastern Greek islands, where more than 120,000 refugees have arrived since the start of the year – up from around 30,000 during the whole of 2014.

Having made the short boat crossing from Turkey to the EU, the refugees have been frustrated to find themselves essentially trapped on the Greek islands. Authorities are attempting to register them all before they are taken to Athens and tacitly allowed to move onwards through Europe.

But due to the unprecedented scale of the crisis, Greek police have been unable to process them fast enough, leading to bottlenecks on islands such as Kos.

At times, the authorities have been unable to supply enough food and do not have enough space to house so many migrants, with more than 1,000 new arrivals landing from Turkey every morning.

Earlier today, an Italian patrol boat participating in a European border watch mission brought about 50 people rescued at sea to Greece – tying up beside dozens of long inflatable dinghies seized by the coast guard.