Merkel feels the heat ahead of vote on third Greek bailout 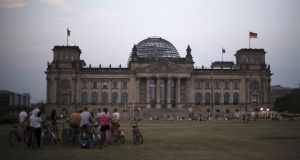 The Reichstag in Berlin, where Angela Merkel’s coalition will vote on the third Greek bailout. Photograph: Stefanie Loos/Reuters

Last week, the glass Reichstag dome atop Berlin’s parliament was closed to visitors when the air inside neared a scorching 50 degrees.

Although it’s cooled down since, tempers remain heated one floor below at the parliamentary party level, where chancellor Angela Merkel pushed her MPs to back a third loans-for-reforms package for Greece.

A Yes is all but a given in the Bundestag today, where Merkel’s grand coalition of her Christian Democrats (CDU) and Social Democrat (SPD) allies has a four-fifths majority.

But all eyes will be on CDU MPs critical of further assistance to Greece. Last month, in a vote mandating Berlin to join talks with Greece about a third bailout, 60 refuse to toe the government line.

His threat triggered outrage from MPs, and it is unclear whether Mr Kauder’s remarks will discipline the troops or fuel the mutinous mood.

At yesterday’s closed-door meeting, the German leader urged her MPs to back the plan signed off on by the 19 euro finance ministers last Friday, saying Athens was operating “far differently . . . and realised [it] needs reforms to get back on its feet”.

The new package offers tougher safeguards to ensure reforms are delivered before loans are paid out, she said.

She was also quizzed about why the cost had risen to €92 billion and why the IMF had yet to come back on board.

Berlin is not the only country required to hold a vote on the Greek deal, either by parliamentary committee or MPs.

Finland gave its backing last Thursday, Latvia and Lithuania followed on Monday, while Austria, Estonia and Spain were set to vote yesterday. The Dutch parliament also debates and votes today.

These countries share Germany’s refusal to entertain an outright writedown to make Greek debt more sustainable, a key issue for Athens and for the IMF.

However even Merkel has conceded “wriggle room” is possible, reducing the debt burden by reducing loan interest rates and extending maturities.

Unlike other MPs, the 54-year-old joked, he didn’t have to interrupt his holidays for today’s vote because he planned his summer break around the Greek loan repayment calendar.

Bailing out Greece the first time was a bad idea, he says, and one that hasn’t improved through repetition.

“We made a mistake when we replaced [Greece’s] private creditors and brought public creditors into the game,” he said.

The Greek drama has revived his original doubts about the single currency, he said, but trying to fix the euro’s flaws on the fly has come at too high a price, generating unacceptable friction between European peoples.

“We have to stand before the German people and say, ‘You will get your money back, the Greeks have to make a great effort,’ yet I know that comes across in Greece as patronising,” he said.

“The fact that people in Europe are talking in an ugly way about each other is a result of the rescue politics and not from the crisis itself.”

Everyone would be better served, he said, if they could agree a temporary exit for Greece to recover outside the bloc.

After warning that the EU bailout strategy supported by Merkel is undermining the EU, Willsch backed down when pressed on how rebellious he actually he was.

He didn’t see any danger of a split in the CDU or a heave against Angela Merkel.

Nor did he want to cause too much disruption because of a difference of opinion over what he now calls the “technical matter” of the third Greek package. “We consider Frau Merkel a very successful chancellor,” he said.

Unlike in the Dáil, Bundestag MPs are not automatically expelled from the parliamentary party for voting against the party whip.

And so Willsch admitted his rebellion on Greece, comes with little immediate danger to anyone: provided it doesn’t attract too many CDU supporters today in the Bundestag.

“If there were too many rebels,” he joked nervously, “they wouldn’t put the question to us.”