John FitzGerald: The calm after the eruption

In contrast to Greece, growth is well under way in Ireland, Iceland, Latvia, Estonia, Portugal and Spain 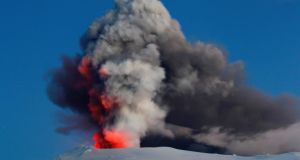 The 2010 eruption of Eyjafjallajökull reminded us just how damaging such events can be. However, the most costly Icelandic eruption of recent times was financial in nature: proportionately, the country’s banking bust was even bigger than Ireland’s. 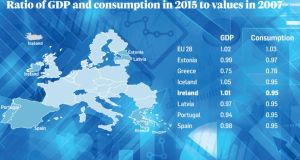 Iceland is a country that, in recent history, has seen many volcanic eruptions that have changed the landscape as well as occasionally sometimes troubled the rest of Europe. The 2010 eruption of Eyjafjallajökull reminded us just how damaging such events can be.

However, the most costly Icelandic eruption of recent times was financial in nature: proportionately, the country’s banking bust was even bigger than Ireland’s.

Icelanders have learned to live with their volcanoes, with elaborate evacuation plans for affected regions should it become necessary. (For example, targeted texts can be sent to all phones in an affected region with advice on evacuation procedures.) However, the country was much less prepared for the financial volcano that erupted in 2008.

Financial crises are well known to have long-tailed effects – the legacy of indebtedness that dogs households and companies after the initial disaster. It is true that recovery from the great recession has taken a number of years. Still, in contrast to Greece, growth is well under way in Ireland, Iceland, Latvia, Estonia, Portugal and Spain.

Recovery began in 2011 in Estonia, Latvia and Iceland. In the case of Ireland, the recovery has been quite vigorous since 2012.

However, the effects of the crisis still linger. As shown in the table, it is only this year that GDP in Ireland and Estonia will have returned to its previous peak; Iceland got there last year. Progress is slightly slower in a number of the other countries that experienced a financial crisis, but Latvia and Spain will probably get there next year.

Only Greece is a very long way from recovering, because the proximate cause of its problems did not lie in the financial sector.

The difference between these two measures – GDP and consumption – reflects the fact that the legacy of debt still impacts on household behaviour. GDP recovered more rapidly because of the importance of the export sector in leading the recovery in these economies. Greece, as the least open economy, has not been able to benefit from rising export demand.

The importance of the recovery in GDP is that it is crucial to turning round the labour market. We have seen in Ireland the importance of the growth in jobs in export sectors, reversing the rise in unemployment. Spain is, at last, also experiencing such a turnaround.

Iceland, which before the bust relied for a significant amount of its exports on its bloated financial sector, has had to reinvent itself. Having lived on its fishing industry for at least a century and financial services only in the 2000s, tourism has grown to exceed fishing as the country’s key export sector since 2007. It now accounts for almost 30 per cent of export earnings.

Last year a million tourists visited Iceland – around three for every inhabitant. (In Ireland it is less than two per inhabitant). Before the crisis, the number was around one tourist per inhabitant.

Iceland is an expensive place to visit, which means it has to attract high-spenders. They are certainly not in the market for sun and beach holidays; instead, many of the visitors are seeking volcanoes, glaciers and scenery.

Because of the challenging and prolonged winter weather, much of Iceland’s tourist trade is concentrated into the three summer months. As a result, many who work in the tourism sector are themselves summer visitors from all over Europe: Spanish experts on whales, Czech glacier guides, French alpinists. There might even be jobs for adventurous Irish students who are experts in seismology!

For example, a significant number of French tourists – who are any way more adventurous than many other Europeans – have switched from visiting Greece to visiting Iceland. A side effect has been that French tour operators have moved their business from Greece to Iceland, finding that doing business there is much easier than in Greece.

Iceland achieved a turnaround with the benefit of a substantial devaluation. Ireland, Estonia, Latvia, Portugal and Spain have all achieved it without a devaluation. What makes for a successful recovery is not the power to change your currency; it is having a successful tradable sector that can grow out of the crisis through exporting. This highlights the fact that, as well as putting order on government finances, it is also important to put the real economy in working order to promote recovery.

What Greece needs is help in reorienting its economy to allow successful export businesses to develop. Relying on tourism when you have a population, as Iceland does, of 350,000 has proved a good strategy. However, with its population of 11 million, it won’t be enough for Greece.