How capital controls are affecting daily life in Greece 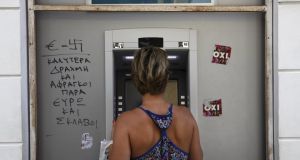 ATM withdrawals are limited to €60, but some banks can run out of €20 notes, in effect making the limit €50. Photograph: Reuters

More than two weeks after capital controls were introduced, the banks remain closed, pharmacies are short on supplies and Greeks’ online purchases are restricted.

Greeks are also unable to make online purchases overseas as this would count as “currency export”, which the capital controls are partly designed to prevent. This means Greek bank account holders cannot buy on Amazon, use their cards abroad or book flights with many foreign airlines.

Even if the banks are opened soon the capital controls will remain in place for at least another two months, according to the economy minister.

However, the Department of Foreign Affairs has urged those travelling to Greece to bring adequate cash. In an update to its travel advice, the department said banking services, including credit card processing and ATMs, could become limited at short notice.

Irish travel agents have not reported significant numbers of customers forfeiting their money by cancelling booked holidays. However, an estimated 70 per cent of bookings made by Greek tourists have reportedly been cancelled.

However the picture in the retail sector has been mixed. According to the national retailers’ association, sales of food and petrol jumped 30 per cent in the 10 days around the introduction of capital controls while all other retail sectors saw a slump of 70 per cent. As many consumers are limiting their spending to food and other essentials, some clothing outlets have slashed prices in an attempt to boost flagging sales. Fearing that a debt writedown might wipe away some of their unreachable bank deposits, many consumers are taking advantage of those offers by using their bank cards.

There have also been reports of companies requiring staff to take compulsory or unpaid leave due to the decline in business.

Civil service salaries have been paid as normal by bank transfer. However, the payment of welfare benefits by Athens city council has been delayed because the necessary funds have not been transferred from the interior ministry. Yet for the many thousands of employees who are already owed months in back pay by their employers as a result of the crisis, the capital controls have made no real difference to their workplace situation.