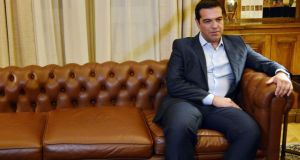 Alexis Tsipras will be confronted by a ‘patriotic front’ of Syriza rebels. Photograph: AFP/Getty Images

Greek voters are likely to return to the polls next month for the third time this year following the decision by prime minister Alexis Tsipras to resign and request the country’s president to call elections at the earliest opportunity.

In a televised statement in which he asked Greeks to give him a clear mandate in new elections, Mr Tsipras said his government needed to go back to the people following the recent agreement with the country’s creditors on a third bailout, the first tranche of which was paid out earlier in the day.

“I feel a moral and political obligation to submit to your judgment. Your vote will decide if the deal we reached can get us out of crisis,” he said in his 10-minute address, in which he sought to position himself as the best option between rebels in his party who aim to return Greece to the drachma and the discredited establishment parties that once dominated the country’s political system.

Shortly before Mr Tsipras spoke, Syriza rebels indicated they would form a “broad, antimemorandum, patriotic front” to contest the election, in a move that would finalise the split within the party that emerged over the decision to agree to a new bailout.

Initially, the elections were expected to be held on September 20th, but the final date remained unclear after the main opposition leader, New Democracy’s Evangelos Meimarakis, said he would do everything in his power to prevent early polls by trying to form a minority government with other opposition parties.

Under Greece’s constitution, the president may allow the leaders of the second and third largest parties to try to form a government. If those attempts fail, a caretaker government must be appointed.

Brussels officials described the decision to call snap elections as a chance to bolster support for the third Greek bailout.

However, ratings agency Moody’s expressed fears the elections could put the €86 billion bailout deal and its implementation in jeopardy.