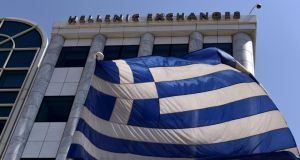 A Greek flag is pictured outside the Athens Stock Exchange in Athens Photograph: Aris Messinis/AFP/Getty Images

Greece’s stock market closed with heavy losses on Monday after a five-week shutdown brought on by fears that the country was about to be dumped from the euro zone.

Bank shares plummeted 30 per cent before loss limits kicked in to stop investors selling any more. The main Athens stock index ended down 16.2 per cent, recovering slightly after plunging nearly 23 per cent at the open.

It was the worst daily performance since at least 1985 when modern records began, including a 15 percent fall when Wall Street crashed in 1987.

“There’s a sense of panic,” said Evangelos Sioutis, financial analyst and head of equities at Guardian Trust. He noted some traders are selling stock merely to raise cash because there is so little liquidity in the Greek economy.

“There are no buyers,” he said. “The outlook is not clear.”

By contrast, the broad European FTSEurofirst 300 index was in positive territory for the day.

Banking shares, which make up about 20 per cent of the Greece index, were particularly hard hit. The overall banking index was down to its 30 per cent daily limit. All five shares comprising the index – National Bank of Greece, Alpha Bank, Piraeus Bank, Attica Bank and Eurobank – were locked down for much of the session at the limit with no buyers.

Greece’s banks have seen deposits severely depleted as Greeks pulled out their euros for fear they would be forcibly converted into a new drachma outside the euro zone. The banks have been propped up by emergency money from the European Central Bank.

Traders said they expected more bank-share losses in the next session.

“Bank shares look like they have more room to slide on Tuesday before bids emerge,” said one fund manager who declined to be named. “It will take a few days for the market to balance out.”

Some companies outperformed, mainly those with exposure abroad, although they still fell.

Trading on the Athens bourse was suspended in late June as part of capital controls imposed to stem a debilitating outflow of euros that threatened to collapse Greece’s banks and hurl the indebted country out of the euro zone. – Reuters / PA