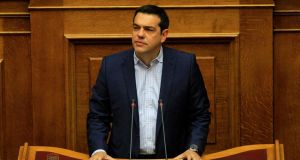 Greek prime minister Alexis Tsipras: the country’s economy has reversed the gains it was making before he was elected. Photograpjh: Orestis Panagiotou/EPA 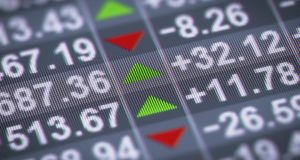 More than 20% could be knocked off the Greek index as market finally reopens after five weeks. Photograph: Getty Images

Greece’s stock market fell sharply on Monday after being shut down for five weeks under capital controls imposed by the government in Athens to stop a flight of euros from the country.

The main index was down nearly 23 per cent in early trading. National Bank of Greece, the country‘s largest commercial bank, was down 30 percent, the daily limit.

The overall banking index was also down its limit. The bourse was last open for trading on June 26.

Greek traders had said they expected torrid day of losses when the Athens stock market opened after being shuttered for five weeks as part of attempts to stop Greece’s financial collapse.

A combination of pent-up trading, worries about the future and Greece’s worsening economy could knock 20 per cent or more off the Athens general index, they said.

Trading of Greek assets in the US over the period the bourse has been closed suggests the same.

“The possibility of seeing even a single share rise... is almost zero,” said Takis Zamanis, chief trader at Beta Securities.

“There is a lot of uncertainty about the government’s ability to sign the . . . bailout on time and for possible snap elections,” Mr Zamanis said.

Greece’s economy has also reversed the gains it was making before prime minister Alexis Tsipras was elected on a strong anti-austerity platform.

The European Commission predicts Greece will fall back into recession in 2015, contracting 2 to 4 per cent after having only just emerged from a six-year downturn.

Banking stocks may take much of the brunt today because Greece’s financial sector needs to be recapitalised. A report in Sunday’s Avgi newspaper, which is close to Mr Tsipras’s government, suggested Athens was seeking around €10 billion this month for bank recapitalisation.

“The focus will be in the bank shares. They will suffer more because their investors have to face a dilution from the [expected] recapitalisation of the sector,” said one asset manager at a Greek fund. He said Greek banks would not be profitable this year and were suffering from a rise in bad loans due to the crisis.