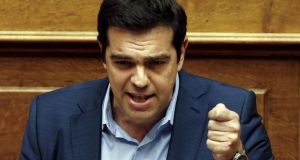 Despite obstacles some were trying to put into Greece’s path, Alexis Tsipras said, he was optimistic “we will get to an agreement”. Photograph: Yiannis Kourtoglou

Greek MPs face another day-long marathon vote to pass another of raft of legislation needed for the country to secure a recently-agreed third €85 billion bailout deal criticised by the German finance ministry as being “not sufficient” in key areas of reform.

The parliamentary debate on the Bill, which runs to 384 pages including appendixes, is expected to get under way today, a day later than Alexis Tsipras’s coalition government intended, after the procedures to recall MPs from their summer recess were reportedly delayed by the parliamentary speaker, Zoi Konstantopoulou.

Ms Konstantopoulou, an MP with Mr Tsipras’s Syriza party, has been an outspoken critic of the government’s decision to enter a third bailout. Last month, she voted against two other legislative packages linked to the negotiations.

“Despite the obstacles that some are trying to put into our path, I’m optimistic we will get to an agreement . . . which will put a final end to economic uncertainty,” Mr Tsipras said, in his first comments since a deal with lenders on Tuesday. He did not indicate who was trying to block the agreement.

Meanwhile the German finance ministry, in a paper circulated to its euro zone counterparts, said it was concerned some planned reforms in Greece were being delayed. Debt sustainability and the role of the International Monetary Fund were “some open questions that need to be addressed in the euro group”, it said.

Last night, Greece’s deputy prime minister, Yannis Dragasakis, said his government had fulfilled its commitment to deal with its partners and was under the impression the objections represented the personal views of finance minster Wolfgang Schäuble.

The agreement envisages a primary deficit of -0.25 per cent for this year and a surplus of 3.5 per cent by 2018 and the recapitalisation of the country’s beleaguered banks – which remain subject to capital controls – by December. It also calls on Greece to push ahead with the privatisation of its main ports, regional airports and power grid operator.

In the last two bailout-related parliamentary votes, 41 Syriza MPs withheld their support from the government by either voting against or abstaining from the Bills.

Despite the perception within the party the deal reneges on the party’s principles and policies, the dissent among Syriza politicians is not expected to grow according to analysts.