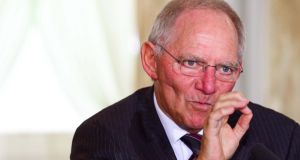 Germany criticised an outline deal between Athens and its bailout monitors as insufficient, upsetting euro zone attempts to smooth the way to a €85 billion rescue for Greece.

Germany’s finance ministry outlined its objections in a paper circulated to its euro zone counterparts just hours before the Greek parliament was due to debate yesterday the austerity and reform package reluctantly accepted by the radical-left government of prime minister Alexis Tsipras.

It also sets up a potentially difficult meeting of euro zone finance ministers tomorrow who are due to decide whether to approve the deal – or grant Athens a bridging loan to give negotiators time to rework the accord.

Berlin did not make clear whether it would ask for such a delay. The finance ministry denied it was rejecting the deal and said it was only raising “some open questions that need to be addressed in the euro group”.

The German intervention revives memories of last month’s acrimonious summit, when Wolfgang Schäuble, Berlin’s hawkish finance minister, openly aired the possibility of a temporary Greek exit from the euro. It punctures the optimism building in Brussels that a deal could be done in time for Athens to pay a €3.2 billion debt to the European Central Bank on August 20th.

The German paper concedes “large parts” of the reform programme agreed last month were included in the outline deal, ranging from tax collection to competition in tourist property rentals. But it says some measures are delayed until October or November and others “are not yet specified”. Berlin is concerned about a proposed delay in establishing a planned €50 billion privatisation fund, due to take control of Greek state assets.

Amid arguments about how authority over this fund would be shared by the Greek government and EU institutions, the negotiators agreed on a task force to sort out the issue by December. The German report says drily: “Just to set up a task force is not sufficient.”

More fundamentally, Berlin is worried about Greece’s capacity to sustain its €320 billion foreign debt, as the recent turmoil has hit the economy hard. The EU forecast that, following a 2.3 per cent output decline this year and 1.3 per cent in 2016, Greece would not return to growth until 2017. – Copyright The Financial Times Limited 2015