After many years ranting in the wilderness, Vassilis Leventis is beginning to look viable 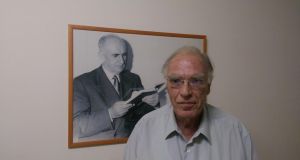 Vassilis Leventis built up a cult following among nocturnal TV viewers for his political talk show, where he railed against the corruption of the establishment

It’s anything but a snazzy election video, and that perhaps is its strength: an official behind a closed door in some government office leans back on his chair as he nonchalantly chats away on his mobile phone, using particular gestures that in Greek indicates obtaining money in an underhand way.

Suddenly the music switches to Greek rock and the official swings into action as an older man enters the room, somewhat sheepishly, and places a large file titled “reform programme” on the desk. He then places the small Greek and EU table flags upright on the official’s desk.

The visitor is Vassilis Leventis, the leader of the Union of Centrists, one of Greece’s best-known “also-ran” parties that has 14 unsuccessful election bids under its belt.

Having clocked up almost 300,000 hits on YouTube in about a week, this homemade video and other clips doing the rounds on social media are giving Leventis a new lease of life, a full 23 years after he set up his party.

Luck seems to be on the side of the perennial candidate on this, his 15th election. Most polls put his party at about 4 per cent, just enough to put it over the 3 per cent threshold necessary to enter parliament in elections on September 20th.

Leventis rose to prominence in the early 1990s, when private TV stations mushroomed as the state’s broadcasting monopoly fell apart. He built up a cult following among nocturnal TV viewers for his political talk show, where he railed against diaploki – the “entanglement”, or corruption, of the establishment.

Other clips showing him “prophesying” Greece’s current crisis years in advance have also gone viral, especially among those too young to remember.

“The young now vote for Leventis. A survey shows we are popular with the under-30s,” the Union of Centrists leader tells The Irish Times, as he sits in his small party offices in central Athens.

“They are tired of all the treachery. Too often they invested their hopes in people, such as [outgoing prime minister Alex] Tsipras and his big words, but then they had to emigrate.”

Nowadays Leventis, who appears somewhat older than the 63 years on his CV, displays little or none of his 1990s tub-thumping.

He believes that the only way for Greece to free itself from troika control and end the crisis is to rebuild credibility with its lenders.

For that to happen, the government needs to prove that it is in favour of “real” reforms, which in his eyes involve economic measures such as cutting pensions above €2,000 by 20 per cent and halving the salaries of MPs, clerics and other state officials

He also calls for political changes, such as limiting the maximum number of years an MP can sit.

“Now that Tsipras has fizzled – and the frisson associated with the shock factor of [extreme right] Golden Dawn has been tarnished – some voters are turning to so-called joke candidates,” says Stathis Kalyvas, a professor of political science at Yale University

“Leventis is the least outlandish of them all. He has consistently denounced corruption and prophesised doom since he started back in the 1980s. Now that he has aged and toned down his once explosive style, he looks more like a wise old man than a madman.

“Which is not to say, of course, he has wised up.”

Leventis believes the elections will produce a coalition of Syriza, New Democracy, Potami and Pasok. But he rules out joining any such government.

“If I participate in a government now, I’ll be part of the problem. But if I stay out, I’ll be better able to press for solutions to the country’s problems,” he claims, predicting that he could get up to 10 per cent in the election.

That’s a prospect that makes the eternal loser wary.

“When I was on 1 per cent, it wasn’t a problem. When you take 10 per cent, all eyes are on you. I’m afraid because I don’t want to betray the voters.”