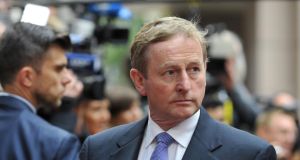 Taoiseach Enda Kenny is seen at the euro zone leaders summit over the weekend. Mr Kenny said on Tuesday the delay in reaching a deal had cost Greece dearly. Photograph: AFP

Taoiseach Enda Kenny has this morning suggested delaying an agreement with its European creditors has cost Greece dearly.

Mr Kenny said he hopes an €80 billion-plus fund will get the country “back on its feet”.

He described the deal done with the Greek Government as very challenging.

“I think it’s an indication of just how costly these measures become once any delay is incurred,” he said.

Minister for Public Expenditure and Reform Brendan Howlin concurred and said the delay in striking a deal with creditors had “compounded” Greece’s problems.

However, Mr Kenny, speaking on his way into Government Buildings on Tuesday morning, said the indications were that right-wing parties in Greece would support the agreement.

“I do hope that they can be put on the road to recovery, challenging though it is.”

Mr Kenny said the document had been agreed between Greece and its creditors and Greek prime minister Alexis Tsipras expected to get it through his parliament.

He hoped it would also be dealt with by the Finnish and German parliaments, as well as in the Netherlands.

“There’s an €80 billion fund plus involved in this to allow for Greece to get back on its feet.”

Mr Howlin described the Greek economy as “wounded” and said its banks would probably need to be further recapitalised when they re-opened.

“There is no doubt that the two weeks of the bank closure has been a very, very painful exercise for Greece.

“The delay, the referendum, all of that, has compounded difficulties.”

Mr Howlin said be believed Irish people wanted to stand with the Greek people: “I believe there is a view that we should contribute to the support of Greece yet again.”

Mr Howlin said there was a real prospect of Greece getting through the programme and back to growth.

He said Ireland would have pointers to give to Greece.

Asked if the Government wanted to see Syriza hold together, he said that was entirely a matter for the Greek people.

“It’s nobody’s business other than the Greek people’s business who their government is.”