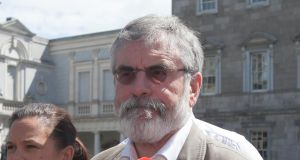 Sinn Féin leader Gerry Adams accused the Government of taking the “side of the strong” against Greece in negotiations. Photograph: Gareth Chaney/Collins

Meanwhile, Sinn Féin leader Gerry Adams accused the Government of taking the “side of the strong” against Greece in negotiations.

Speaking after news of a deal at European level broke, Mr Adams said: “The conduct of a number of EU governments over the past number of weeks has been alarming.

“The decision is now with the Greek government and parliament. I wish them well in their deliberations.

“Today could well be the day when all pretence of a Europe of equal states and people was lost and replaced by a Europe of the powerful and the wealthy.”

Tánaiste Joan Burton on Monday expressed relief that euro zone leaders had managed to strike a deal with Greece. She also attacked Sinn Féin’s stance on the crisis.

Speaking on her way into Government Buildings, Ms Burton insisted Ireland and the “European social democratic movement” had been extremely supportive of Greece.

“I’ve never been a fan of default. I do know that Sinn Féin, notwithstanding the fact that stupidly they voted for the bank guarantee, they have always indicated that they may favour a default,” she said.

“They’ve twisted and turned on that. The consequences of default for any economy and particularly for Greece if it went outside the euro zone would be one in my view of extraordinary difficulty.”

Ms Burton added: “Sinn Féin’s version of economics and default is seriously lacking in any realistic understanding of the incredible hardship that that would impose on the people of any country where there was a default.”

The Tánaiste said she was “relieved” that the outline of an agreement had been reached after many hours of discussions in Brussels between leaders and finance ministers.

“Obviously the actual decision on this has now to be made by the Greek Government and the Greek parliament,” she added.

Ms Burton said she believed Greece was being offered a path that would help ease the humanitarian crisis, while building the economy and getting people back to work.

“Because certainly at the moment the situation of the Greek economy with the banks effectively closed means that it’s almost impossible to have normal business and commerce running in the country at a time when it’s the height of the tourist season, normally a very good time for the Greek economy.”

She said she would like to see normal economic life resume as quickly as possible.

“We have been extremely supportive of Greece and so has the European social democratic movement because essentially the pathway for a county like Greece is to have growth and investment.”