Syriza will seek to form government with the Independent Greeks, its former coalition partner 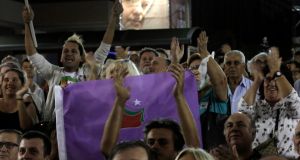 Supporters of the leftist Syriza party celebrate after the announcement of exit poll results in Athens. Photograph: Yannis Kolesidis/EPA 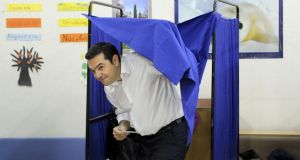 Former Greek prime minister and leader of leftist Syriza party Alexis Tsipras holds his ballot as he exits a voting booth during the general election at a polling station in Athens, Greece. Photograph: Michalis Karagiannis /Reuters 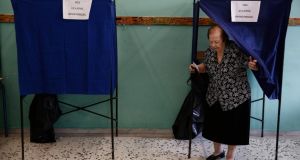 A voter exits a polling booth after marking her ballot slip during the general election, in the suburb of Marousi, Athens, Greece. Photograph: Yorgos Karahalis/Bloomberg 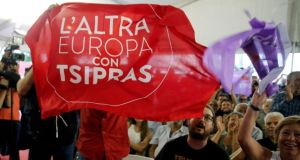 Supporters of leftist Syriza party, including someone with a banner for ‘The Other Europe’, react at the party’s main election kiosk after the announcement of the first exit polls in Athens, Greece. Photograph: Alkis Konstantinidis /Reuters

Mr Meimarakis said the priority for the country was to form a government.

“The electoral result appears to be concluding with Syriza and Mr Tsipras in the lead,” he told journalists.

“I congratulate him and urge him to create the government which is needed and come to parliament.”

Syriza will seek to form a government with the Independent Greeks, its former coalition partner, a Syriza source said on Sunday after early national election results put the party in the lead.

Official results showed that with more than 30 per cent of Sunday’s votes counted, Syriza were on 35.3 per cent, against 28.15 percent for rivals New Democracy.

Based on that calculation, Syriza would gain 144 seats in the 300-member parliament, and New Democracy 75. The Independent Greeks would get 10 votes, potentially giving a Syriza-Independent Greeks alliance a narrow majority. Third place in the election looked set to go again to Golden Dawn, a far right party with a swastika-like symbol, with around 7 percent of the vote.

Mr Tsipras’s victory appears to have been stronger than some opinion polls had suggested.

The firebrand leftist fought hard for Greece to be let off harsh austerity rules imposed by international creditors, only to back down last month after Greece’s banks were shut and the country was pushed to the wall.

More than two dozen of his politicians abandoned him, many saying he had betrayed his principles. He argued that his tough negotiating stance softened the blow of austerity and persuaded creditors to agree a restructuring of Greek debt.

Apart from Golden Dawn and the communist KKE party, the major parties in the new parliament have now accepted the cash-for-reforms deal to keep Greece in the euro zone.

“After years of almost unprecedented crisis, the vast majority of Greeks are endorsing parties that are promising to keep the country in the euro even if that implies thorough and painful reforms,” Holger Schmieding, chief economist at Germany’s Berenberg bank said.

For former allies still opposed to EU-imposed austerity, however, Mr Tsipras is a turncoat.

Yanis Varoufakis, the outspoken former finance minister who infuriated EU officials with his refusal to accept their proposals, called the election “the ‘legalisation’ of the capitulation that followed the signing of the dead end, humiliating and irrational” bailout.

The new government will also need to handle growing refugee inflows. Greece has been the main route into the European Union for tens of thousands of migrants arriving by sea, although nearly all of them quickly leave, heading north over land across the Balkans to richer countries like Germany.

In a painful reminder of that crisis, 13 migrants died in Turkish waters on Sunday when a boat carrying 46 people en route to Greece collided with a dry cargo vessel and capsized, a Turkish coast guard source said.