Greek banks open but only for limited services

Greece opens its banks across the country after a three-week shutdown as it begins to take steps aimed at restoring trust both locally and internationally. Video: Reuters 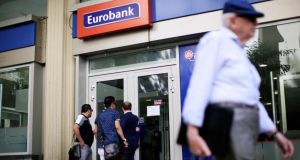 For the first time in three weeks, Greek banks opened their doors to all customers on Monday, but only to offer them a limited range of services due to the capital controls that continue to restrict withdrawal levels and prohibit most cash transfers out of the country.

At the same time, VAT increases came into force, pushing a wide range of goods and services, from coffee to condoms and ferry tickets to funeral services, up from the existing 13 per cent rate to the maximum 23 per cent rate. According to one study, the increases could cost the average household up to €650 annually.

As many account-holders have been able to use their cash cards in shops and electronic banking to pay bills while the banks were closed, many of the customers who turned up at the reopened banks were pensioners who don’t have or know how to use ATM cards.

“I wanted to enquire about a fixed-term deposit, which I’ve kissed goodbye in my mind. It was for five years and it only matured on July 10th. The staff had to call to find out what was going on, as the instructions on how to deal with each inquiry were still coming in,” said Ioanna, who found 50 people in front of her as she arrived at a bank at opening time.

One pub and restaurant owner expressed his relief that the banks had reopened: “I banked a lot of money and they didn’t ask any questions,” he said.

Business leaders said they expected it would be some months before the capital controls were lifted. “I believe they will have to wait until the full recapitalisation of the banks . . . which I believe will be around September or October,” Theodoros Fyssas, chairman of the Hellenic Federation of Enterprises, told Bloomberg.

Ahead of another key vote in parliament on Wednesday, the government has indicated it will defer some controversial measures from a Bill that will contain a number of prior actions that the country’s creditors have made conditional for talks on a third bailout for the country to begin.

Among the changes likely to be delayed are measures to discourage early retirement and to reform the taxation of the farming sector, which the government fears could push more Syriza MPs to vote against the government.