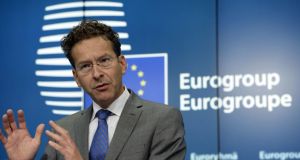 Head of the eurogroup Jeroen Dijsselbloem: “A lot of trust had been lost . . . it has to be rebuilt.” Photograph: Thierry Charlier/AFP/Getty Images

Negotiations on a third bailout for Greece will take at least four weeks, the head of the eurogroup of finance ministers predicted yesterday, though he warned the Greek parliament must first pass reform measures.

Speaking after three days of marathon meetings in Brussels, Jeroen Dijsselbloem welcomed the decision by euro zone leaders to give the green light for a third bailout for Greece pending implementation of reform in Athens.

He said the question of trust had been at “the heart of the intensive discussions” on Greece. “Over the course of the last months, and particularly around the referendum, a lot of trust had been lost . . . It has to be rebuilt,” he said.

Agreement on the opening of talks with Greece on a third bailout of up to €86 billion was reached by euro zone leaders in Brussels early yesterday after 17 hours of talks.

Before discussions can begin, however, the Greek parliament is required to legislate by tomorrow for a raft of reforms in areas including VAT and pensions. Finance ministers are expected to hold a conference call on Thursday morning, with further discussions later in the week.

Despite reaching agreement on the basis for talks, some ministers warned further steps need to be agreed before discussions would commence. Speaking on his way into yesterday’s meeting of eurogroup finance ministers, following the meeting of euro zone leaders, Finland’s finance minister Alex Stubb warned “conditionality” would be part of any deal.

“There seems to be a lot of people who have jumped the gun here and thought that the beginning of the negotiations is automatic. No, it is absolutely conditional on the decision by the Greek government and the Greek parliament.”

Finland is one of a number of countries that need parliamentary approval for any third bailout package. With the German Bundestag expected to be recalled on Friday, Germany’s chancellor Angela Merkel said she could recommend “with full confidence” the Bundestag authorise the opening of loan negotiations once the Greek parliament approves the entire programme and has passed the first laws.

While yesterday’s eurogroup meeting had been expected to tackle “bridge financing” to address the country’s short-term needs, including a €3.5 billion payment to the European Central Bank next Monday and its arrears to the International Monetary Fund, instead a task force has been appointed to explore immediate financing.

One possibility proposed by the European Commission is that the EU-wide European Financial Stabilisation Mechanism fund could be used as a source of quick cash for Greece, though any move to activate the fund would need the agreement of non-euro countries such as Britain and Poland. Finance ministers of all 28 member states will join euro area finance ministers today in Brussels for talks.

Speaking yesterday evening, Klaus Regling, the head of the European Stability Mechanism – the EU rescue fund established in 2012 – warned the design of a third bailout would take time. “We know time is critical for Greece but there are no shortcuts.” He expected the IMF to commit to a third programme, once its payment arrears were met by Greece.

He said a Greek bailout could easily be accommodated by the ESM, which has a €455 billion capacity.