Analysis: Key moments that led to the agreed third Greece bailout worth €86bn 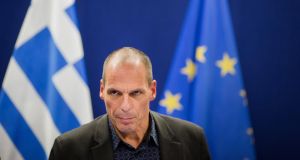 Greece bailout key moments: The replacement of the controversial Yanis Varoufakis as finance minister by Euclid Tsakalotos was a key factor in the change of mood in the talks. Photograph: Jasper Juinen/Bloomberg

So the eurozone has agreed the €86 billion third Greek bailout. Here are the five stand-out points in the deal which was announced late on Friday after a meeting of euro group finance ministers.

In mid-July Greece was on the brink of euro zone exit, amid contentious talks culminating in an all night meeting of EU leaders.

A month on the whole bailout deal has been negotiated and we are told by European Commission president Jean-Claude Juncker that Greece “ will irreversibly remain a member of the euro area.”

The Tsipras government seems to have simply decided it had no option but to accept the terms on offer. The replacement of the controversial Yanis Varoufakis as finance minister by Euclid Tsakalotos was a key factor in the change of mood in the talks.

However it has still all come together much more quickly than expected, with Germany apparently outflanked in its calls for a slower approach.

A key issue now is that the IMF has not yet committed to becoming involved in the bailout. Its chief executive, Christine Lagarde, said after the talks that Europe needs to offer significant relief on Greece’s debts if they are to be sustainable in future.

This is required if the IMF is to contribute financially, because it does not want to be party to a bailout that does not work.

The euro group finance ministers have agreed to look at the debt issue when the programme is reviewed in October, but there is no commitment to act and considerable reservations about taking any dramatic action .

There is scope for disagreement here and no IMF involvement could leave the programme short of planned cash and upset Germany, which wants the IMF involved. It is worth noting , however, that while the old debt burden remains an issue , the new cash is being extended on generous terms, with maturities of over 30 years and interest rates averaging around 1 per cent .

Implementing the programme is a huge political and economic challenge for Greece. It will get €26 billion in the coming weeks provided the deal gets parliamentary approval in Germany, the Netherlands and a small number of other states where parliaments must vote.

Of the initial funds, some €16 billion will be used to repay earlier borrowings from the ECB, IMF and European funds and €10 billion will go on the first phase of bank recapitalisation.

There are also signs that the ECB will provide liquidity required for the banks to open. However, restoring financial stability is a significant challenge, as will be introducing the tax and spending measures and wider reforms and delivering on a planned privatisation programme.

There is speculation of fresh elections in Greece in the autumn. Agreeing the programme is one things, but implementing it in a struggling economy will be hugely difficult.

The first job is to restore stability and get the banks open , but beyond that a major restructuring of the sector is coming.

We know ourselves how difficult this is and how restoring faith in banks takes time. In Greece, the recapitalisation will involve more cash beyond the initial €10 billion and a “bail-in” of bond holders, including the senior bondholders, meaning they will lose cash.

Of course we remember the debate about how senior bondholders got all their cash back here, though the amount of bond debt in Greek banks is small by comparison. However what happens will be watched as a sign of how post-crisis euro zone bank resolution rules will be applied in future.

Bank shareholders are likely to be pretty much wiped out , but - unlike in Cyprus in 2013 - bank depositors, even those with deposits over the €100,000 limit, are to be protected. This apparently reflects fears of causing further damage to the financial system and the wider economy.

5. The implications for Ireland :

For Ireland, by far the most important outcome is that the deal removes the risk of volatility which a Greek euro exit could have brought. Nobody knows how this would have panned out, but any impact on growth or state borrowing costs could have been costly.

In the case of Greek default, Ireland could also have had to write off a loan of around €350 million extended to Greece as part of the first bail out and our Central Bank profits could have been hit, due to losses on Greek bond holdings held by the ECB and other factors.

The green light for the bail out means the money will come from the European Stability Mechanism. Ireland has already contributed €1.27 billon to the ESM as part of its initial capital paid in by 2013.

The ESM will now go out and borrow the money to lend to Greece, backed by the funds paid in. In the long term funds paid in by member states would be at risk if Greece were to default.

However the bailout agreement has no immediate implications for our exchequer. The Irish authorities will quietly watch any talks on Greek debt restructuring , but it seems unlikely, given our recovery and Greece’s much higher debt levels, that this will have any implications for us.