Greece: what happens next? 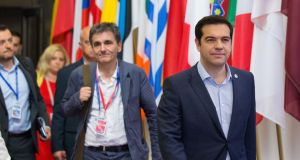 EU leaders may have signed off on an agreement to consider a third bailout package for Greece, but there are a number of key events over the next few days which will determine whether a deal will be ultimately agreed.

Monday: At 4 pm (3pm Irish time) eurozone finance ministers meet in Brussels for a eurogroup meeting. Chaired by eurogroup president Jeroen Dijsselbloem, it is expected to focus on the question of “bridge financing” for Greece to try to address the country’s immediate financing needs.

Monday (afternoon/evening): the European Central Bank is expected to decide whether to increase the amount of emergency liquidity assistance (ELA) it is providing to Greek banks which have been closed for two weeks.

Tuesday: finance ministers of all 28 EU member states gather in Brussels for a scheduled meeting. Any involvement on non-euro zone countries, such as Britain, in bridge financing for Greece could be discussed at this meeting.

Wednesday: the deadline by which the Greek parliament must pass a range of reform measures, including streamlining of VAT and pension reforms .

Thursday /Friday: possibility of a eurogroup meeting of finance ministers or euro zone summit to consider Greek parliament’s implantation of measures and whether to sign up to negotiations on a new memorandum of understanding between Greece and the troika for a third bailout

National parliaments, including the Bundestag, may also be recalled towards the end of the week to vote on whether to endorse the beginning of negotiations on a third bailout.