Greece urged to put ‘quality before speed’ in bailout talks 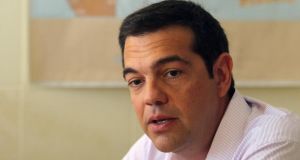 Germany has urged Greece and its creditors to put “quality before speed” as negotiators in Athens strive to finalise a bailout worth up to €86 billion.

A finance ministry spokesman in Berlin said the government would scrutinise any agreement, which must also be voted through by the Bundestag, but cautioned against rushing a deal. Greece and its lenders are seeking an accord by August 20th, when the country must make a payment of €3.2 billion to the European Central Bank.

“We are ready to do this examination quickly this week if necessary, but quality comes before speed,” said the spokesman, who added that there must be “strict conditionality” for financial help. “It is sensible – that is our belief – to fix the size of the first payment tranche to the extent of the reforms implemented,” he said.

Following last month’s dramatic summit in Brussels that took Greece to the brink of being ejected from the euro, the left-wing government of Alexis Tsipras is said to be negotiating seriously and constructively with officials representing creditors.

Both sides wrangled nonstop through the weekend in Athens and resumed negotiations after midnight in the hope of finalising arrangements by the deadline.

“Progress has indeed been made,” said a European commission spokeswoman. “A deal can be realised in the month of August, preferably by August 20th.”

“Should a first ESM tranche not be possible in August, then we would have to discuss renewed bridge financing.”

The negotiations are focused on the terms of what is known as a Memorandum of Understanding, the bailout conditions, and on what Athens has to deliver up front, known as prior actions, to secure the financial lifeline.

Parliaments, notably in Athens and Berlin, are certain to be recalled out of their summer recess to facilitate the agreements since the Tsipras government has to pass endorsing legislation and reform bills to access the funds while German MPs will have to agree to the terms of the new bailout.

Senior officials in Brussels predict that the amount of the third Greek bailout in five years will ultimately run to €100 billion. But northern EU creditor governments sceptical about the chances of the latest rescue attempt want to keep the bill to below €86 billion, the figure agreed at the overnight euro zone summit in Brussels in July. The IMF has also ruled out backing a new bailout unless there is an explicit agreement on debt relief for Greece.

The scale of the problems plaguing a new deal was reinforced on Monday by the disclosure that the Greek economy is expected to shrink by up to a further 2.3 per cent this year, following five years of recession that only started to lift last year.

Meanwhile, in Germany an economic think tank reported the German economy has saved €100 billion since 2010 because its borrowing costs have fallen during Europe’s debt crisis.